Vaccine demand up, but cos to take some weeks to up output – ET HealthWorld

With a number of states complaining of vaccine shortage and temporarily shutting centres – at a time when the need is to increase the daily rate of jabs — there has been intensified focus on the production and supply end of the chain. Indications are that India’s vaccine production is expected to be limited for a few more weeks though a step-up is expected as Serum Institute of India and Bharat Biotech ramp up capacity, some of which is expected to be ready by next month, prompting the government to prioritise vaccinating segments that are seen to be more vulnerable.

Serum Institute, with a monthly capacity to produce 60-70 million doses, will increase production to nearly 100 million next month, which was its original target for January-February 2021. While it has supplied about 100 million doses so far for domestic use, this could cumulatively rise to about 470 million by August, depending on orders from the government.
Similarly, Bharat Biotech is looking to more than double production — from the current 200,000 doses a day to 500,000 by next month — as it expects to get a very big capacity bio-reactor up and running at the Bengaluru facility by next month, sources told TOI. Having built capacity that can produce 200 million Covid-19 vaccines annually, by the end of the year it plans to use its four facilities in Hyderabad and Bengaluru to manufacture 700 million every year.

‘50 million vax doses in pipeline for delivery to various states’

“We are further adding new lines to produce an additional capacity of 500 million doses per annum,” a company spokesman said.
The company’s founder Krishna Ella had earlier said the company was hoping to have 150 million does ready by July-August. “We are also expecting Sputnik V to get approved for emergency use. So, the situation will improve but at present the stocks are limited and the supplies are rationalised as per requirement. There is, however, no shortage,” a senior government official told TOI. Sources said there are 50 million doses in the pipeline for delivery to various states and this will meet vaccination needs for the next 12-15 days. The vaccination programme is using current production as well as inventories.

Russian Direct Investment Fund has tied up manufacturing of over 850 million doses of Sputnik V in India, including agreements with Hetero Biopharma, Gland Pharma, Virchow Biotech, Panacea Biotech and Stelis Biopharma. Around 426 million doses are expected to be earmarked for use in the country.

In the coming months, more vaccines are expected to be available for use. For instance, bridging studies for Johnson & Johnson’s vaccines are expected to start after regulatory approval on the one-shot jab. Last August, the company had announced a tie-up with Hyderabad-based Biological E. Zydus’s plasmid DNA vaccine ZyCoV-D is undergoing Phase 3 trials on 30,000 patients and a rollout may happen around July.
There are others such as Pune-based Gennova Biopharm’s ‘messenger or mRNA vaccine’, which are a while away as even Phase 1human trials haven’t begun. 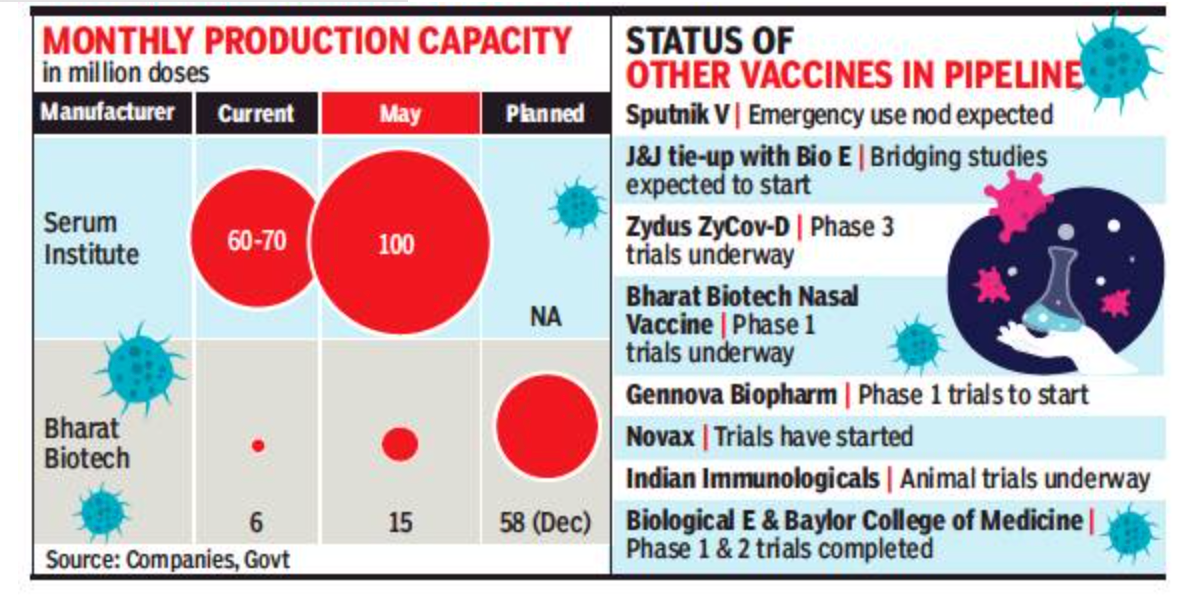