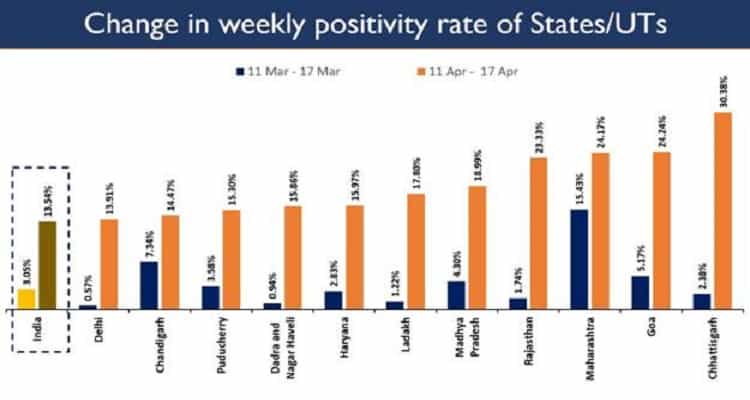 Chhattisgarh reported the highest weekly positivity rate among states at 30.38 per cent; 10 states recording 78.56 per cent of new cases

India’s daily positivity rate in the last 12 days has doubled from 8.00 per cent to 16.69 per cent as daily new cases continue to rise. 2,61,500 new cases were registered in the last 24 hours, as per the latest health ministry data.

India’s cumulative vaccination coverage exceeds 12 crores with over 26 lakh doses given in the last 24 hours. The country reportedly took just 92 days to reach 12 crore vaccinations, the fastest country across the world, as per health ministry data. Gujarat, Maharashtra, Rajasthan, Uttar Pradesh alone have administered more than 1 crore vaccines each.

Maharashtra has reported the highest daily new cases at 67,123, followed by Uttar Pradesh with 27,334 while Delhi reported 24,375 new cases.

1,38,423 recoveries were registered in the last 24 hours, while 1,501 deaths were reported in the same period.  Ten states account for 82.94 per cent of the new deaths. Maharashtra saw the maximum casualties (419) followed by Delhi with 167 daily deaths.