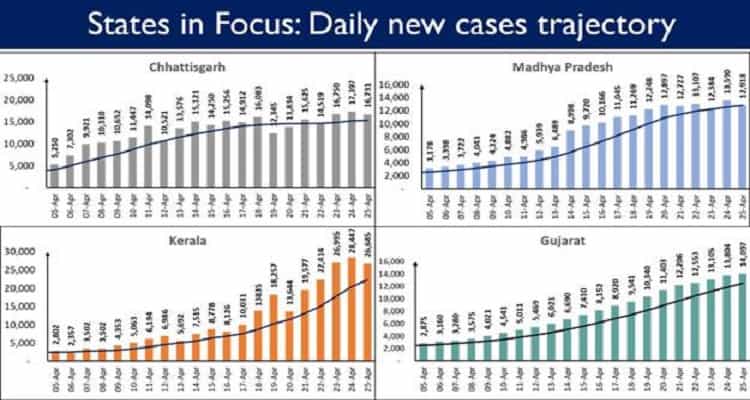 In an interaction with industry members of healthcare sector, organised by FICCI, TS Singh Deo, Minister Health Care & GST, Government of Chhattisgarh urged industry to come forward and support the state during these difficult times.

Chhattisgarh is one of the eight states that cumulatively account for 69.94 per cent of India’s total active cases, the other seven being Maharashtra, Uttar Pradesh, Karnataka, Rajasthan, Tamil Nadu, Gujarat and Kerala.

“Apart from the business and moral obligations, in this prevailing times of crisis, you (industry) can help us, whether through CSR or outward contributions, by putting up infrastructure in the sphere of testing. You can also help us by setting up ICUs and oxygen generating plants. We also need to work out how to meet supplies in time,” he said.

Elaborating on RT PCR testing, the minister said that while the Government of India would like all states to achieve at least 70 per cent of testing within the states, Chhattisgarh has a long way to go. “We are currently at 40 per cent. I would request the industry to help us understand the methods in which we could pick up our RT PCR testing capabilities,” he added.

As per the FICCI release, he also spoke on the possibility of setting up a BSL-4 level laboratory that could undertake genome sequence testing. “This can be treated as a long-term investment for a long-term goal to serve the people. We are also looking at setting up around 1200-1300 ICU units. We have floated our proposal to the government, and seek the industry’s guidance towards this,” he further added.

The minister also urged the industry champions to help subsidise vaccines for the state. “Chhattisgarh is comparatively a lesser developed state that has its own budgetary and financial limitations. I am a universal healthcare person. My stress is on public utilities being strong enough, but this cannot be achieved without the private sector. My priority is to strengthen the public sector as much as possible and walk along with the private sector to be constructive. We hope that in the long run Chhattisgarh can provide the industry with its requirements,” he said.

Pradeep Tandon, Chair, Chhattisgarh State Council President, Jindal Steels & Power said that the second wave of the pandemic has taken us by surprise and there is a strong need for the industry to get together with the government in taking up various measures to counter this. “Availability of infrastructure and various facilities is of topmost priority and FICCI can provide help to the government and the vaccination drive in whichever way possible,” he said.