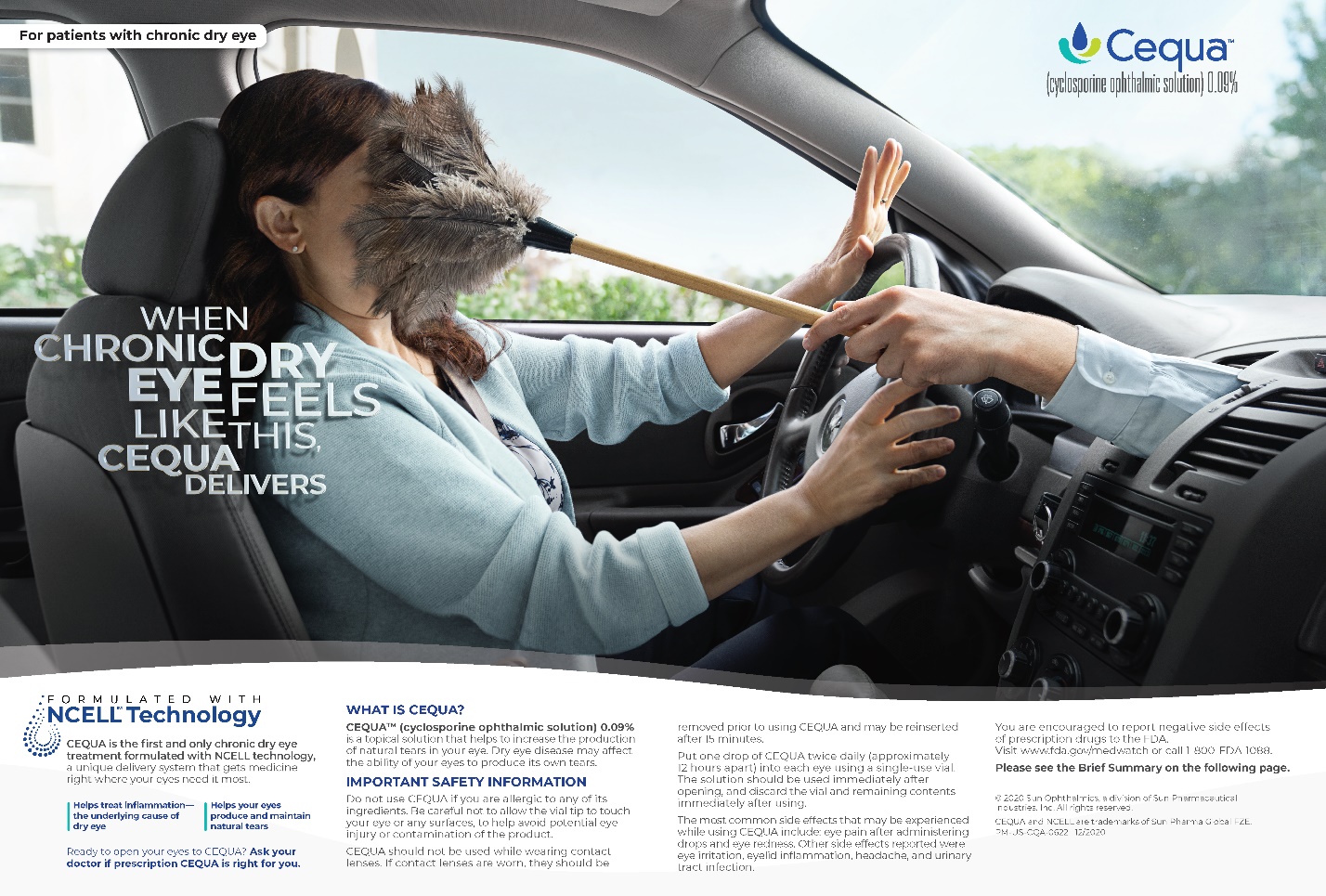 A feather duster to the face is how Sun Pharma’s new campaign gets the point across about the discomfort of dry eyes in its new effort “Battle Back,” the first DTC effort for dry eye treatment Cequa.

The multimedia campaign from Sun Ophthalmics, which launched in December in print, includes telehealth and point-of-care promotions, social media, radio and online video, all set to roll out by the end of February.

The creative is lighthearted, using humor and striking visuals to accentuate the annoying but also sometimes painful problem of dry eyes. Sun conducted significant qualitative and quantitative market research to determine patients’ reaction to the ads and received a lot of positive feedback.

“When we asked how they felt about their dry eye, there were a lot of visceral recurring descriptions,” Mark Hagler, SVP, head of ophthalmics, oncology and long-term care at Sun, said. “… We wanted to pick ones so that a patient would say, ‘Yeah that’s me.’ ’” The feather duster ad “tested off the charts,” he said.

RELATED: Sun wins approval of glaucoma drug and its once-troubled Halol plant to produce it

Some of the creative had to be adapted thanks to COVID-19. The woman in the car with the feather duster coming out of a vent was originally supposed to be on an airplane. However, the pandemic made the plane option impractical. Sun usually shoots ads in Canada, but border closures there also forced a change. Even the eventual U.S. commercial shoot had its challenges.

“Shooting in California, New York, New Jersey, or Connecticut—those permits just fluctuated on a daily basis, depending on the number of COVID-19 cases in the area,” Hagler said.

Cequa was approved in August 2018, but its market rollout didn’t begin until October 2019. Sun waited to maximize payer coverage before eventually launching at the Annual Meeting American Academy of Ophthalmology (AAO) medical conference.

The patient response to Cequa has been very positive, Hagler said, with doctors sending Sun videos of patients reacting to how well the drug works for them.

“I’ve been in pharma over 20 years and rarely have I worked with a product and in an unsolicited fashion received that type of feedback from physicians on behalf of patients,” Hagler said.

Sun touts Cequa’s success in part as the only prescription dry eye treatment with NCELL technology. However, it’s far from the only player in the market. The category heavyweight is AbbVie’s Allergan portfolio drug Restasis, which raked in $1.14 billion in 2019. Novartis has Xiidra and its own humorous DTC campaign featuring an animated inflammatory villain. More recently, Kala Pharmaceuticals’ Eysuvis was approved in October as a short-term treatment for dry eye disease.