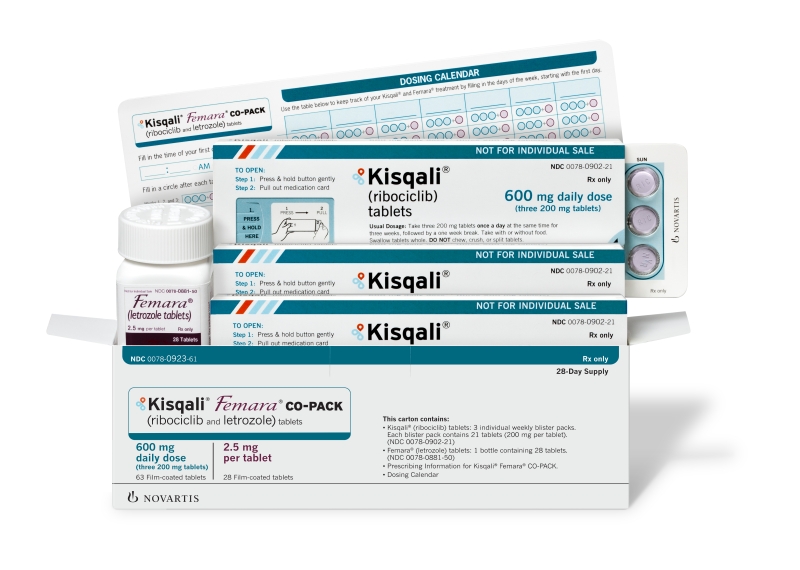 Kisqali plus endocrine therapy helped pre- and perimenopausal women with HR+/HER2- disease live a median 58.7 months, according to phase 3 data presented at the San Antonio Breast Cancer Symposium’s virtual annual meeting. That’s compared with 48 months for endocrine therapy alone, translating to a 24% reduction in the risk of death for the Kisqali regimen.

Jeff Legos, M.D., Novartis’ head of oncology drug development, called Kisqali’s new survival showing “very impressive,” given that these patients historically survived for around three years after treatment. Patients in the control arm of this Monaleesa-7 trial appeared to live longer because some went on to receive Kisqali after an initial survival readout, which showed a 29% reduction in the risk of death.

The Kisqali regimen also extended the time period before patients need follow-up chemotherapy by about 31%. Patients on the Kisqali combo lived a median 50.9 months before their first post-treatment chemo, while the time was 36.8 months for endocrine therapy alone.

The survival benefit was similar in a subgroup of patients who took a nonsteroidal aromatase inhibitor (NSAI) as part of their endocrine therapy. The death risk reduction in those patients was 20%, as the Kisqali group also lived a median 58.7 months, versus 47.7 months for the control arm.

That’s the most relevant data for Kisqali in this patient population, given that it’s only approved by the FDA in combination with an NSAI. The Monaleesa-7 study also tested tamoxifen as an endocrine option, but, in those patients, researchers identified a higher-than-expected increase in an abnormal heart rhythm called QT prolongation.

The current Monaleesa-7 study was carried out in patients who hadn’t been previously treated with a CDK4/6 inhibitor or endocrine therapy, but it did allow previous treatment with chemotherapy.

In a cherry on top of Kisqali’s 2020 SABCS data cake, Novartis unveiled a pooled analysis of the three trials, showing the CDK4/6 inhibitor reduced the risk of disease progression or death in three of the four main subtypes of breast cancer.

In patients with the more traditional Luminal A and Luminal B subtypes, where Legos said patients have done reasonably OK with solo endocrine therapy, adding Kisqali significantly slashed the risk of disease progression or death by 37% and 48%, respectively, across the three trials.

The best news for Kisqali, though, according to Legos, came from the HER2-enriched subtype, which makes up about 15% of the HR2+/HER2- breast cancer population. This subgroup “traditionally had not done very well on endocrine therapy alone and hence it can be sort of deemed as a poor prognostic factor,” Legos explained.

But in this group, the Kisqali-endocrine pairing cut the risk of disease progression or death by 61%.

The showing in this subtype is important because it’s the first time a CDK4/6 inhibitor combo topped endocrine therapy alone in these women, Legos said. Three years ago at the SABCS event, a retrospective analysis of the Paloma-2 trial found Pfizer’s market-leading CDK4/6 inhibitor, Ibrance, didn’t benefit the HER2-enriched subtype, he pointed out.

“I think this just adds to the growing body of evidence that these mixed results that we’re seeing in both the metastatic setting, as well as in the adjuvant setting, may suggest that not all of the CDK4/6 inhibitors are equal,” Legos said in an interview ahead of the data presentation.

And in the postsurgery setting known as adjuvant treatment, Ibrance recently failed to lengthen the time early breast cancer patients could live without invasive disease returning. It didn’t deliver a benefit in a wider patient group or in a high-risk subgroup.

Meanwhile, updated data from the phase 3 monarchE trial presented at this year’s SABCS showed the adjuvant pairing of Eli Lilly’s rival CDK4/6 inhibitor Verzenio and endocrine therapy reduced the risk of invasive disease after surgery by 28.7% in high-risk patients with an extended follow-up of 19 months.

Novartis has been attributing Kisqali’s better efficacy—as compared to Ibrance’s—to its drug’s higher inhibition of CDK4 over CDK6. While CDK4 is more widely expressed in breast cancer cells, CDK6 is found more in the bone marrow; plus, CDK4 plays a greater role in cell proliferation and growth, Legos explained. Verzenio also inhibits CDK4 to a higher degree.

Kisqali isn’t omnipotent, though. The Novartis drug didn’t show a tumor progression improvement in the basal-like subtype. Legos said this represents a small group of patients whose tumors resemble triple-negative breast cancer. These patients constitute an average 3% of participants across the three Monaleesa trials, which Legos said is reflective of the real-world makeup.

Novartis is running a separate trial called Natalee, hoping to show that Kisqali on top of endocrine therapy works as an adjuvant treatment for both intermediate and high-risk patients. Data from that trial are expected in 2022.