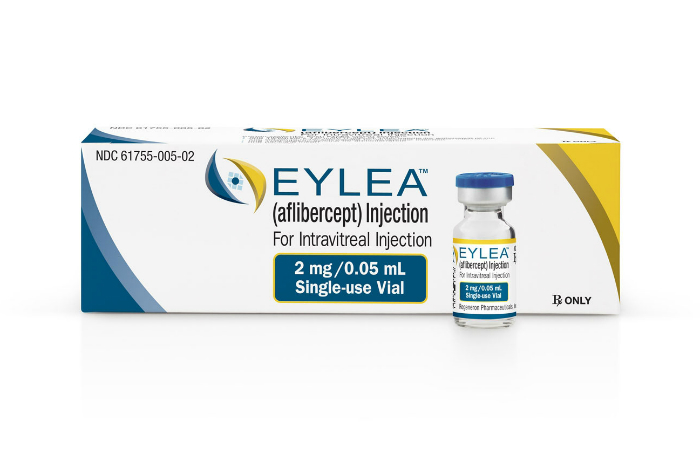 When Regeneron snagged an FDA nod for eye drug Eylea in diabetic retinopathy in 2019, the agency opted against approving a 16-week dosing schedule despite positive data from a pivotal trial. Now, the drugmaker hopes a new study from the National Institutes of Health will change that.

The investigators tested Eylea at a dosing interval of every 16 weeks after an initial four doses given more frequently in the first four months.

At 2 years, 43.5% of placebo patients in the trial developed center-involved diabetic macular edema with vision loss or proliferative diabetic retinopathy, compared with 16.3% for 16-week Eylea.

Currently, the anti-VEGF drug only carries an approval for a eight-week dosing regimen—even though the phase 3 Panorama trial used to win that FDA clearance included a 16-week arm. Now, the company said it will take findings from both trials to the FDA to discuss the 16-week dosing interval.

If eventually approved, the longer dosing interval could offer a convenience that further sets Eylea apart from Roche and Novartis’ rival VEGF inhibitor Lucentis, which is administered once a month for DR.

In the Panorama trial, Eylea given every 16 weeks following an initial dosing period cut the risk of proliferative DR or anterior segment neovascularization by 85% over control after one year of treatment, while the eight-week arm slashed that risk by 88%.

While all these data are displayed on Eylea’s label, the FDA only recommends the eight-week interval in the “dosage and administration” section.

Last year, Regeneron unveiled two-year data from Panorama showing that Eylea reduced the likelihood of vision-threatening events by at least 75% over the period. About 50.4% of patients in the sham group developed a complication, versus 16.3% of those treated every 16 weeks with Eylea and 18.7% of patients who got Eylea every eight weeks.

Both Eylea and Lucentis have extended their dosing intervals before, but only in the bigger wet age-related macular degeneration indication. Both are now allowed to go as long as 12 weeks between doses in that disease, although the FDA specifically said on their labels that the less frequent dosing is “not as effective” as their respective recommended dosing schedules. The FDA recommends Eylea every 8 weeks and Lucentis once a month for AMD.

Regeneron and its ex-U.S. partner Bayer are also trying to prolong Eylea’s intervals even further with a high-dose formulation of 8 mg versus the current 2 mg. Clinical trials are ongoing for high-dose Eylea in wet AMD and diabetic macular edema.

That could help the pair fend off a looming competition from Roche, which is developing a VEGFxAng2 bispecific antibody called faricimab that just matched Eylea in wet AMD in two pivotal trials. That drug is administered up to every 16 weeks.