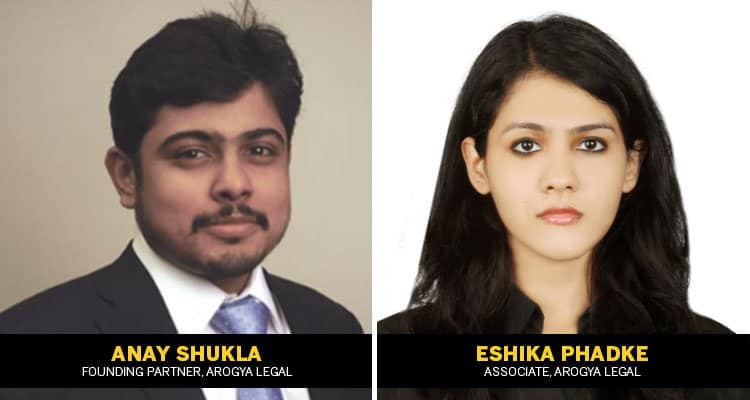 Anay Shukla, Founding Partner and Eshika Phadke, Associate, Arogya Legal, outline the requirements imposed by Indian law to protect the privacy and confidentiality of women who carry an unwanted pregnancy and wish to abort, and discuss practical challenges that may be faced by hospitals, doctors, pharmacists, telemedicine companies and women from a privacy and confidentiality standpoint

The failure to guarantee confidentiality and privacy of a pregnant woman has been identified as one of the barriers to safe abortions and abortion care. The legal and ethical requirement for a doctor to maintain confidentiality of a patient – especially in case of a procedure that is as controversial and stigmatised as an abortion – is well established. Interestingly, the Medical Termination of Pregnancy Act, 1971 (MTP Act), which is the umbrella statute that regulates medical and surgical abortion in India, did not contain a provision that dealt with confidentiality of the pregnant woman till it was amended in March 2021.

Through the said amendment, a provision was inserted in MTP Act which now prohibits any registered medical practitioner from revealing the name and other details of a woman who has availed an abortion to anyone except a “person authorised by any law.” A breach of this provision will attract imprisonment for up to one year and/or a fine.

While the MTP Act itself was silent on the subject of confidentiality until recently, the Medical Termination of Pregnancy Regulations, 2003 (“MTP Regulations”) made under MTP Act have, since the day of their introduction, exhaustive provisions built into them to ensure that the identity of a woman undergoing an abortion is kept confidential.

The fact that an amendment to the MTP Act was warranted despite existence of such regulations could possibly be a result of the poor adherence to the MTP Regulations. However, the said amendment, even though clarificatory in nature, is certainly welcome.

Mandatory documentation for hospitals and doctors

The MTP regulations explicitly specify the documents that should mention the woman’s name. These are – the form in which the doctor/doctors certify their opinion regarding legitimacy of termination of pregnancy, the consent form for the procedure and the admission register. All of these have been designated as ‘secret documents’ under the MTP regulations. The only other document in which a woman, who has undergone an abortion’s name may appear, is a medical certificate issued at her behest to enable her to apply for leave from her employer, who is also under an obligation of secrecy by force of the MTP regulations.

In fact, the system for record keeping envisaged under the MTP regulation is designed to ensure that a woman’s identity is kept private. A serial number (in the format ‘x of year’) is to be assigned to the woman while entering her details into the admission register. This number is used as the only identifier in all case-sheet, Operation Theatre (OT) register, follow-up card or any other document or register (except for the consent form and certified opinion) that are generated in the course of the procedure. The admission register is not open to inspection. So, there is no way to link the serial number to the woman. This is especially relevant since the details to be filled in the admission register include even the religion of the woman.

The other documents containing the woman’s name i.e. the consent form and the certified opinion are supposed to be placed in an envelope and sealed by the consulting/operating doctor immediately after the termination procedure. The envelope is required to display the serial number assigned to the pregnant woman in the admission register, name and address of the doctor who terminated the pregnancy, and the date of termination. It is also supposed to be clearly marked “secret.”

Once sealed, the doctor is supposed to send the envelope to the head of hospital or owner of a place that has been approved for termination of pregnancies for safe custody. If such person is unavailable, the doctor must keep the envelope safely in his or her possession till it may be handed over. In the event that a termination is performed under extra-ordinary circumstances at a place that has not been officially approved as a centre for medical termination of pregnancy, the sealed envelope containing consent form and certified opinion is to be sent to the Chief Medical Officer (CMO) of the state no later than the day following the day of termination.

A monthly statement of abortions performed at a hospital/approved place is to be submitted to the CMO of the state each month. The statement does not contain personal details of the women – just aggregate numbers.

While doctors are bound to maintain confidentiality of a patient, the administrative and clinical support staff at the hospital are not under a similar statutory obligation. Therefore, if they want to, they may be able to ascertain and disclose the identity of a woman who has availed an abortion at the hospital. To remedy this, the administration of the hospital should undertake periodic sensitisation trainings and ensure that all staff members are bound by strict non-disclosure agreements. Any breach of confidentiality by administrative or clinical support staff may have serious consequences for the hospital and the consulting/operating doctor.

Another challenge to a woman’s confidentiality and privacy arises when she attempts to obtain an abortion kit from a pharmacy.

The pills that are used for medical abortions are covered under Schedule H of the Drugs Rules, 1945 (popularly called Schedule H drugs) which means, that, by law, they may only be sold upon production of a valid prescription from a registered medical practitioner. The Drugs Rules, 1945 stipulate that pharmacy that dispenses any Schedule H medication is required to maintain records of all drugs prescriptions dispensed at the store including the name and address of the patient (in this case, the pregnant woman). Unlike the admission register, certified opinion and consent forms, however, the pharmacists’ sales records are not ‘secret documents’ and are open to inspection by a multitude of persons.

That being said, it is not entirely clear whether it is lawful for pharmacies to dispense pregnancy termination kits, though it may be done routinely as a matter of practice. The abortion pill combination kit containing misoprostol and mifepristone tablets was approved for use by the Central Drugs Standard Control Organisation (CDSCO) with the disclaimer “Warning: product is to be used only under the supervision of a service provider and in a medical facility as specified under MTP Act 2002 & MTP Rules 2003.” The language suggests that the kit should only be dispensed by the doctor terminating the pregnancy. If an abortion kit is dispensed by the doctor/hospital, it is required to maintain records of the stock of the abortion kits that has been dispensed to patients, mentioning only the serial number assigned to the woman.

The legal status of telemedicine-facilitated medical abortions in India is still uncertain. However, in extra-ordinary circumstances (such as the pandemic), instances of medical teleconsultation in relation to unwanted pregnancy are not difficult to imagine.

It may be possible to consume oral abortion medication in home settings subject to a qualified and trained doctor’s advice. However, procuring pills from either a pharmacy or from the doctor via courier may result in the woman’s identity being exposed. The woman may wish to (and is legally entitled to) keep the matter private even from her partner and family, and receiving a package containing the pills would hinder with her ability to do so.

Apart from the logistical challenges, if abortion-related advice is sought from a doctor over a telemedicine app or website, it could result in serious privacy and confidentiality challenges for the woman since consultations are sometimes recorded for quality and training purposes, and the recordings may be accessed by a third-party. Some apps also scan prescriptions to inform the user if any of the prescribed medications are available with an e-pharmacy, and thus, may inadvertently access information regarding the unwanted pregnancy.

In other words, it is likely that in a medical teleconsultation regarding unwanted pregnancy, the telemedicine service provider or website or app may maintain health records which would identify that a woman was carrying an unwanted pregnancy, and where applicable, was prescribed an abortion kit, thereby ignoring her confidentiality and privacy. This information may also be shared with unknown third-parties depending on the privacy policy.

Thus, except in extra-ordinary circumstances, it is advisable that teleconsultation between doctors and patients with respect to unwanted pregnancy and abortion is avoided.

The right to privacy is a woman’s constitutional right, and all laws have to respect that. If a law does not provide for it, or rather works against it, then such a law is unconstitutional and sooner or later will either have to be revised or done away with.

Last but not the least, all hospitals/approved places must follow prescribed documentation procedures diligently to ward off any liability under the MTP Act.