Dr Anish Desai, founder, IntelliMed Healthcare Solutions suggests that important nutraceuticals must be integrated into clinical practice guidelines, especially in situations where conventional drugs cannot be used, and further research must be carried out to establish efficacy and long term-safety of these nutraceuticals in specific indications

Nutraceuticals are increasingly being used in psychiatric practice for mental well-being, (1) with a correlation between the deterioration in dietary habits and increased prevalence of mental disorders in western populations, having been observed. Interestingly, nutritional psychiatry is an emerging field of nutrition, dietetic and psychological sciences that explores the changes nutritional interventions can make to one’s mental health.

Various nutrient deficiencies such as that of amino acids, omega-3 fatty acids (omega-3FAs), vitamins, and minerals, are linked to mental illness. (3,4) Current evidence supports the adjunctive use of SAMe, methylfolate, omega-3 and vitamin D with antidepressants to reduce depressive symptoms.(5) Studies for bipolar disorder revealed promising, albeit conflicting, evidence for omega-3 fatty acids and N-acetylcysteine. Isolated positive results were reported for coenzyme Q10. Since the given nutraceuticals are tolerable and accessible, they may be useful as potential adjunctive treatments for bipolar disorder.(6) Long‐term supplementation with antioxidant vitamins may improve the cognitive function in healthy people as well.(7)

Nutraceuticals, their Action and Utility (2) 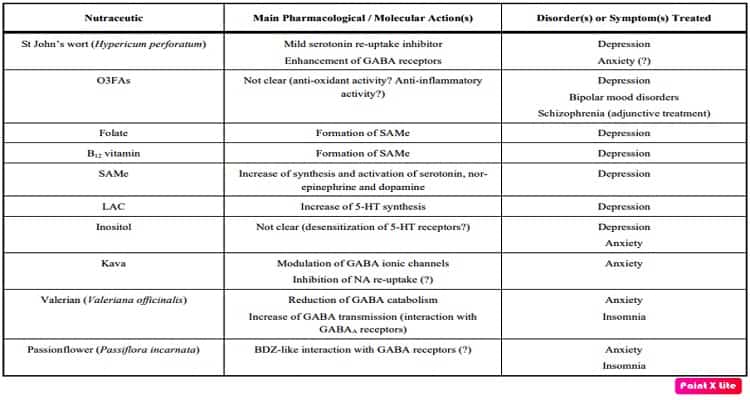 O3FAs are essential long-chain polyunsaturated fatty acids (PUFA) obtained from dietary sources such as salmon, sardines, and anchovies. People who don’t eat fish can have it through in fish oil capsules. O3FA levels have been reported to be low in mental disorders. It is mainly used for bipolar depression and major depression. Furthermore, Omega-3 supplements may boost the effectiveness of antidepressants. American Psychiatric Association recommends all adults to consume fish at least twice a week. Individuals with mood, impulse control, or psychotic disorders should take a daily 1–2 grams supplement containing both EPA and DHA. These have been labelled as “generally regarded as safe” by FDA.

5-HTP is used in the treatment of depression, anxiety, panic, sleep disorders, obesity, myoclonus and serotonin syndrome. A few studies also indicate its potential in neurodegenerative diseases like Alzheimer’s and Parkinson’s disease.

SAMe is a chemical found naturally in the body, which has comparable efficacy to a standard tricyclic antidepressant (TCA). Furthermore, SAMe has also been suggested to be of use in shortening the onset of standard antidepressant therapy.  SAMe is generally used for depression. Adults may benefit from 400 to 1,600 mg per day, although some people will need to take 3,000 mg per day to alleviate symptoms.

DHEA’s effects on the body are similar to those of testosterone. They have been postulated to have a neuroprotective effect. Research suggests possible role of these agents in the management of schizophrenia, dementia and depressive disorders.

N-acetyl cysteine NAC is a powerful antioxidant which is not made in the body. NAC reduces oxidative stress and inflammation. Research supports its beneficial effects in obsessive compulsive spectrum disorders.

Choline is present in almost every tissue in the body. It is essential for normal function of all cells. It may be useful in dementia

This naturally occurring substance regulates circadian rhythms in the body, such as the sleep/wake cycle. Melatonin improves sleep quality in people with schizophrenia, major depression, and seasonal affective disorder. This supplement may be an alternative to drugs, especially for children and the elderly.

This herbal supplement is produced from an extract of a plant, scientifically called, Hypericum perforatum. St. John’s Wort may help people with mild or moderate symptoms of depression. St. John’s Wort may also be used as an alternative to medication for children and adolescents.

Deficiencies in niacin, thiamine, vitamin B12, and folate, are known to have adverse neuropsychiatric effects. Some vitamins are necessary for synthesis of other nutraceuticals. Folic acid is useful for depression. When combined with an antidepressant, folic acid supplements can boost symptom relief — especially in women. Low serum folate levels have been associated with Alzheimer’s disease and other types of dementia.

Calcium dysregulation is reported to be important in disorders such as dementia and depression.  It may be used in depressive disorder, schizophrenia and substance abuse. Intake of other micronutrients (iron, magnesium and zinc) has been linked to structural as well as functional development of brain.  Magnesium and zinc consumption improves attention, executive functions, behavioural, and emotional problems of children and adolescents. Zinc may be used in children with ADHD.

Benefits of nutraceuticals for mental health

Since mental health is an important aspect of overall health, finding alternative treatments which are more effective and have less side effects is important. This could be another way to increase awareness and social participation. Nutraceuticals from natural sources may hold a potential clinical application to enhance the antidepressant effect of medications. Many nutraceuticals are low-cost options that are worthy of clinical consideration.

The most important nutraceuticals for mental health include, Omega-3 fatty acids, St. John’s wort, NAC, valerian, Kava, Ginkgo, folic acid, vitamin B12, calcium, magnesium, zinc, S-Adenosylmethionine, inositol, alfa-lactalbumin and passionflower. These nutraceuticals must be integrated into clinical practice guidelines, especially in situations where conventional drugs cannot be used (such as in mild symptom, for children, adolescents, and pregnant women). Further research must be carried out to establish efficacy and long term-safety of these nutraceuticals in specific indications.