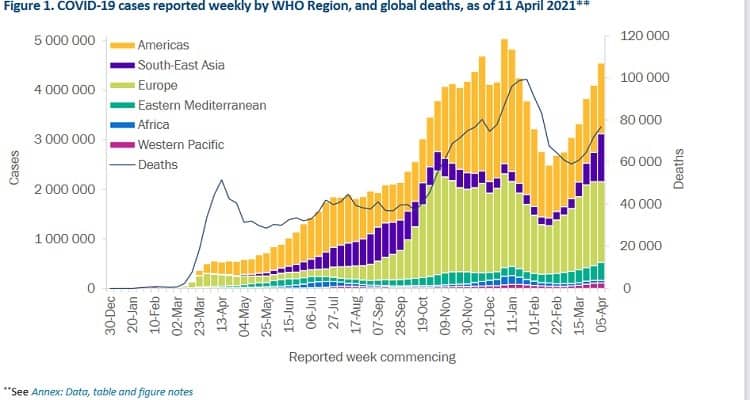 Number of countries reporting variants of concern continue to increase too

As per WHO’s weekly epidemiological update on COVID-19 dated April 13, based on data received by from national authorities as of 10am CET April 11, India reported the highest numbers of new cases (873 296 new cases; with a 70 per cent increase).

The largest increases in case incidence were observed in the South-East Asia (most notably in India) and the Eastern Mediterranean regions. All regions, except for the African Region and the Americas, reported increases in the number of deaths, with the largest increase of 189 per cent from the Western Pacific Region (largely driven by a steep increase in new deaths in the Philippines) followed by 47 per cent in South-East Asia.

The number of countries reporting variants of concern (VOCs) continue to increase too. The WHO report mentions that this information should be interpreted with due consideration of limitations of ongoing surveillance, including but not limited to differences between countries in sequencing capacity and which samples are prioritised for sequencing.

WHO continues to advocate for strengthening surveillance and sequencing capacity, and a systematic approach to provide a representative indication of the extent of transmission of SARS-CoV-2 variants; based on the local epidemiological situation and capacity, and the detection of unusual events.