MUMBAI: Maharashtra may add more Covaxin centres to the existing six as additional doses of the Bharat Biotech vaccine are expected soon. In a bid to accelerate vaccination, the state has also planned to finish administering at least one Covid vaccine dose to its healthcare workers in the next 12 session days.

Maharashtra is behind over a dozen states on vaccination: its completion rate of 45% is well below the national average of 55%. Among the states, it has the highest number of registered healthcare workers to be vaccinated, though till now UP has vaccinated the most in India (6.73 lakh) followed by Maharashtra.

Additional centres to administer Covaxin will be added depending on the volume of next supply, even though the vaccine given under ‘clinical trial’ mode has seen a mixed response. Dr Dilip Patil, state immunisation officer, confirmed that Maharashtra would receive more doses of the Bharat Biotech vaccine in the coming weeks. “Following that, we will add more centres,” he said. The state had received 20,000 Covaxin doses initially, of which 2,000 each were distributed to the six centres, including JJ Hospital. So far, 4,601 health workers have taken the vaccine. In Mumbai particularly, many doctors who were originally assigned Covishield, opted to take Covaxin.

The Centre, meanwhile, is believed to have told every state to schedule the vaccination of all healthcare workers at least once before February 20 and for all frontline workers before March 6.

In Mumbai, around 40% of 1.85 lakh registered health workers have been vaccinated. Incidentally, the tentative deadlines were given after Union health minister Harsh Vardhan said in Lok Sabha on Friday that the third phase of vaccination for citizens above the age of 50 and those who are younger but have serious comorbidities is likely to begin mid-March. Dr Archana Patil, head of the Directorate of Health Services, said the drive would be intensified to push up coverage. “We will also involve the private sector on a larger scale. Our aim is to finish administering at least the first dose to all health workers in the next 12 session days,” she said, refuting vaccine hesitancy as a factor for a slow uptake of the vaccine.

For frontline workers, Patil said, police and corporation employees are two of the major groups. “We have asked districts to hold mixed sessions for faster coverage,” she said. However, vaccinating all frontliners could be a long road ahead. The state is estimated to have nearly 20 lakh in this group, of which 5.5 lakh have been registered. The immunisation officer said vaccination cannot be done in a “mission mode”. “We are talking of vaccinating lakhs so it will go hand-in-hand,” he said. But, he added, more centres will be added every day. Currently, over 661 centres have been activated, to be increased to 750 gradually.

In Mumbai, where the vaccination of frontline workers has seen a slow start, officials said mapping of civic wards has been posing a hurdle. “Software can create sessions through blocks at district levels. But Mumbai doesn’t have blocks and is instead divided into 24 wards,” said an official. About 20% of the roughly 4 lakh combined force of healthcare and frontline workers have been vaccinated in the city. 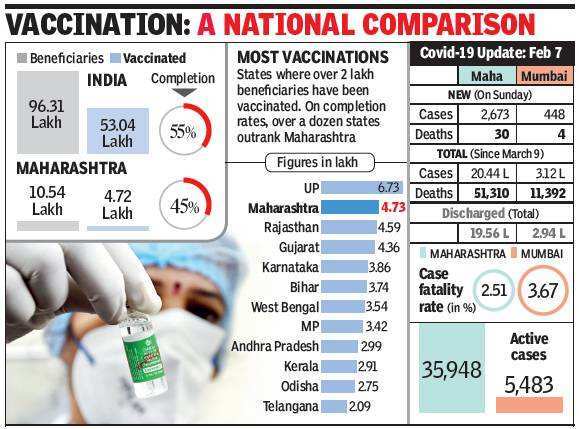