India only 2nd country to top 1.5L cases in a day – ET HealthWorld

India recorded more than 1.5 lakh fresh Covid-19 infections on Saturday, becoming the second country after the US to register the grim milestone on the back of a sharp uptick in cases from the Hindi heartland, particularly Chhattisgarh, UP and Bihar.

There were 1,52,545 new cases recorded across the country, up more than 5% from Friday’s count of 1.45 lakh. The 1.5 lakh count was crossed just six days after daily cases went past the 1-lakh mark, a 50% rise in less than a week. The peak count during the first wave of infections was 98,795, recorded on September 17, as per TOI’s corona database.
Daily addition of 60,000 active cases takes tally past 1.1 million
Although deaths have been rising steadily during the second wave, the toll continues to be low compared with the case fatality rates seen during the peak of the first wave in the country.

Active cases crossed1.1million on Saturday with a daily addition of over 60,000 for the fourth day in a row.

While Maharashtra has been the worst hit by the second Covid wave and continues to lead the count of daily cases by a wide margin, the rest of India has seen a much sharper surge in infections in the past two weeks, particularly after Holi. 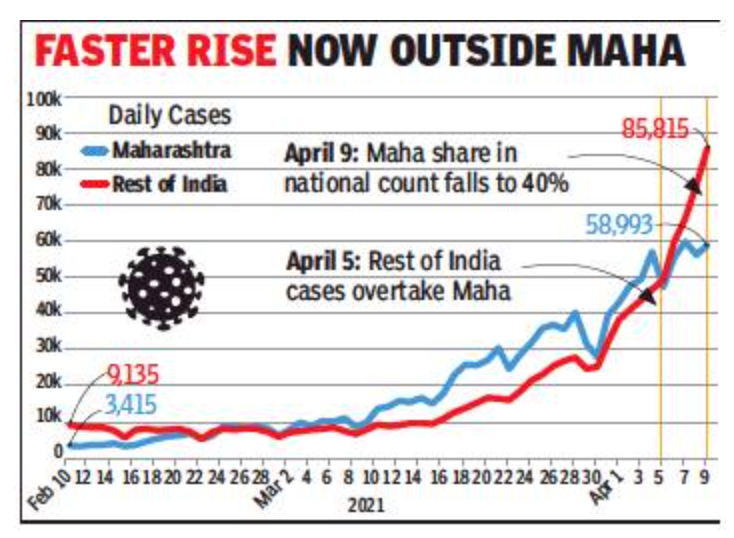 Maharashtra’s share in the daily national case count has dropped from the peak of 65% on March18 to 36.4% on April 9. A similar trend is seen in the daily death tolls.

Meanwhile, Chhattisgarh saw a massive rise in cases and fatalities on Saturday. The state reported 14,098 new infections, up from 11,447 on the previous day while deaths climbed to 123 from 91 on Friday. Uttar Pradesh saw a similar surge as detected infections rose to 12,787, from 9,695 on the earlier day while 48 deaths were recorded.
Bihar logged 3,469 cases, the highest since August 15. The state had reported 2,174 new infections on Friday.

Among other states that recorded their highest ever daily counts ere Gujarat, where the tally crossed 5,000 for the first time at 5,011 and deaths rose to 49, Madhya Pradesh (4,986 new cases) and Rajasthan (4,401).

With the pandemic resurging yet again in Kerala, the state reported 6,194 fresh cases, the highest since February 3. 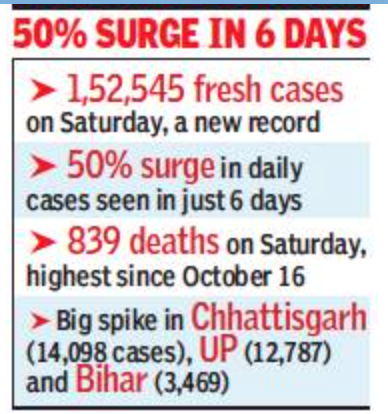