In Britain, a Simple ‘Jab’ Opens a New Front in the Coronavirus Battle 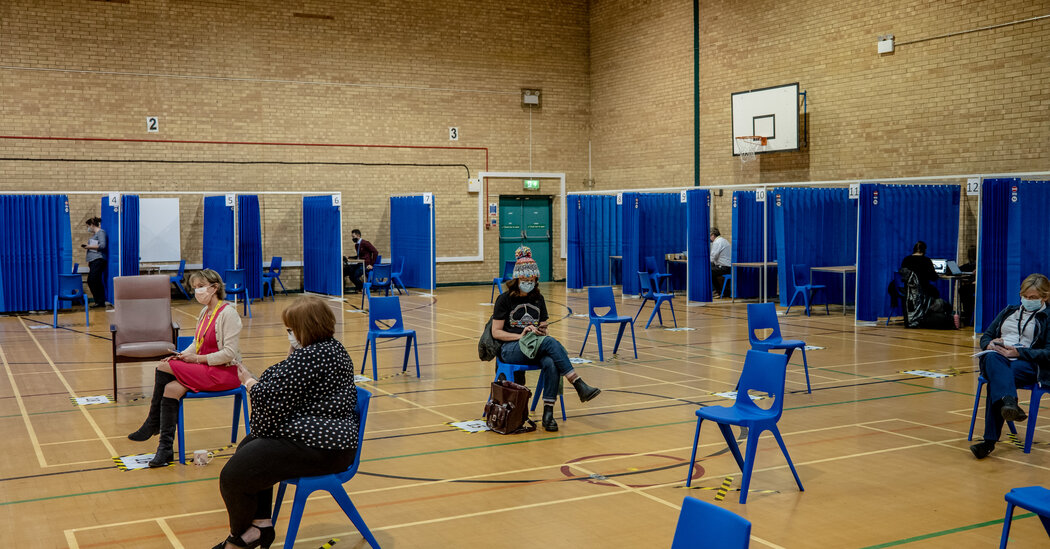 CARDIFF, Wales — It was a simple thing. A swipe with an alcohol pad, a tiny needle prick in the upper arm and the application of a small Band-Aid.

But the health care workers receiving a new coronavirus vaccine here on Tuesday, among the first in Britain, know it’s more than that.

He was among 225 people given the vaccine at this makeshift clinic in Cardiff on Tuesday, a site scrambled into existence as Britain revved up a mass inoculation program that a week ago was only theoretical.

Dr. Hingston, who works as an intensive care doctor in the nearby University Hospital of Wales and as an helicopter ambulance doctor, described the event in understated terms: “Just like the flu jab.”

But he was clearly aware that the simple act had greater purpose: protecting not only himself, but hopefully his family, colleagues and patients from a potentially life-threatening virus. The vaccinations taking place here have already resonated around the world.

It had been just six days since regulators in Britain announced emergency approval for the Pfizer-BioNTech vaccine, the first country to release a tested vaccine to the public. The start of the vaccination program — for a virus that has infected tens of millions globally and claimed more 1.5 million lives — signals a new phase in battling the coronavirus in Britain, which has been hard hit by the illness.

Eventually, Britain plans to vaccinate as many people in the nation that it can. But for now, as it rolls out its first 800,000 doses of the vaccine, those aged 80 and over, those working in nursing homes and health care workers are at the top of the list.

Dr. Hingston has spent more than two decades in the profession and more than half of that as an I.C.U. doctor. But on this particular morning, as he visited the clinic set up in the disused gymnasium in Cardiff, he was the patient.

He arrived alone and masked, and showed his ID before being ushered into the gym. There, a handful of small, blue-curtained cubicles lined the perimeter, surrounding chairs placed several feet apart in a grid.

In a separate room nearby, pharmacists filled syringes with the vaccine, and trained new staff members in the careful process. Unlike a typical vaccine — like the flu shot — which often comes preloaded in a syringe for ease of use, the new Pfizer doses must be prepared on-site. Before being used, they must be stored in a deep freeze, and once thawed last for only five days.

They are kept refrigerated on site and then prepared vials must be used within hours, contributing to a sense of urgency among the staff.

Darrell Baker, the clinical director of the site’s pharmacy operations, looked on as a colleague drew a saline solution up a syringe, flicked his finger against the needle to shake off a droplet, and then injected it into a vial of the vaccine. The mixing is necessary because the manufacturers have yet to develop a way to effectively package the vaccine in individual doses.

“Hopefully over time, all of this fiddling around we have to do will be automated and we will get it in syringes,” Mr. Baker said. “But the fact that we’ve even got the vaccine is fantastic.”

The mixture was drawn up into five syringes and laid out in blue trays. The trays were then shuttled into the gym, and picked up by nurses who moved swiftly to get through the waiting patients. By the end of the day, the center was scheduled to provide 225 vaccinations, including one for Mr. Hingston. For him, the whole process was over in minutes.

“I didn’t even feel it,” he said with a chuckle, chatting breezily with Lynne Cronin, 60, the acting lead nurse at the center, who delivered his vaccine.

“You’re exactly the people we need to come through,” she said, after learning that he works in an I.C.U.

Mr. Hingston has described the past year as a challenging one. He and his colleagues scrambled to prepare their I.C.U. for an outbreak as they saw coronavirus cases grow from a cluster in China to a global pandemic. He watched doctors in the same roles as his fall ill and die in hospitals in China, Spain and Italy as the numbers swelled.

By spring, the first cases reached Wales. Initial projections there estimated their hospital would run out of beds during the first wave. That didn’t happen. Nor did it during the second wave this fall. But cases numbers have continued to climb and so have the deaths.

In some ways, things have become less difficult during the second wave, the phase still underway in Wales. Equipment has improved as have treatment options for patients, Dr. Hingston said. And Cardiff in particular has seen a smaller number of patients compared to the spring. But the patients being treated have tended to be sicker and older.

“These patients are in the hospital a long time,” he said. “And their families are unable to come in and visit unless there’s end-of-life care in process. So that’s been really difficult.”

It’s the fear of overwhelmed wards, being unable to treat patients and hearing families’ last words to their loved ones delivered over the phone that’s been the hardest on him, he said.

Recently, he said he overheard the goodbye call of the family of a Filipino patient in the ward.

“Even though it’s a different language, it is very obvious what was being said,” Dr. Hingston said. “It’s those kinds of days which have been pretty rough for everyone.”

For other health care workers who were inoculated here on Tuesday, the experience was also an emotional one.

Betty Spear, a retired pediatric nurse, pulled back the blue curtain from the small cubicle she was working in after administering a vaccine to a nurse who openly wept. The woman had worked in a Covid ward.

“She just cried and said this was such an emotional day,” Ms. Spear said. “I presume she has seen a lot.”

Ms. Cronin, who administered Mr. Hingston’s vaccine, said it had been an extensive undertaking to get the clinic up and running for Tuesday.

“It’s been a huge ask to get everybody ready,” she said. “We’re still trying to train people up. We needed today and the next few days to sort any teething problems.”

But other than a few issues with staff struggling the computer system being used to document each vaccination, she said the morning had been smooth.

Fiona Kinghorn, the executive director of public health at the Cardiff and Vale University Health Board, the public health body that led the rollout of the mass vaccination program here, said there would be challenges in coming weeks as teams reached more people. She asked that the public be patient as they grew their vaccination staff into the “army” that would be needed.

“That’s going to take some time,” she said. “We’ve got really small amounts, relatively, and we will have to phase this in over time.”

For the health care workers like Dr. Hingston who were vaccinated here on Tuesday, it was just the start of this next stage. He’s booked for the second dose next month, and according to Pfizer’s data, within seven days will have the full protection this particular vaccine offers.

“Will it change anything I do today? No,” he said. He’ll still be wearing his mask, still donning his P.P.E. at work, social distancing and hand washing frequently.

“But, in months’ time,” he said, “when everyone can be vaccinated, then life will change back to some normality, hopefully, for all of us.”