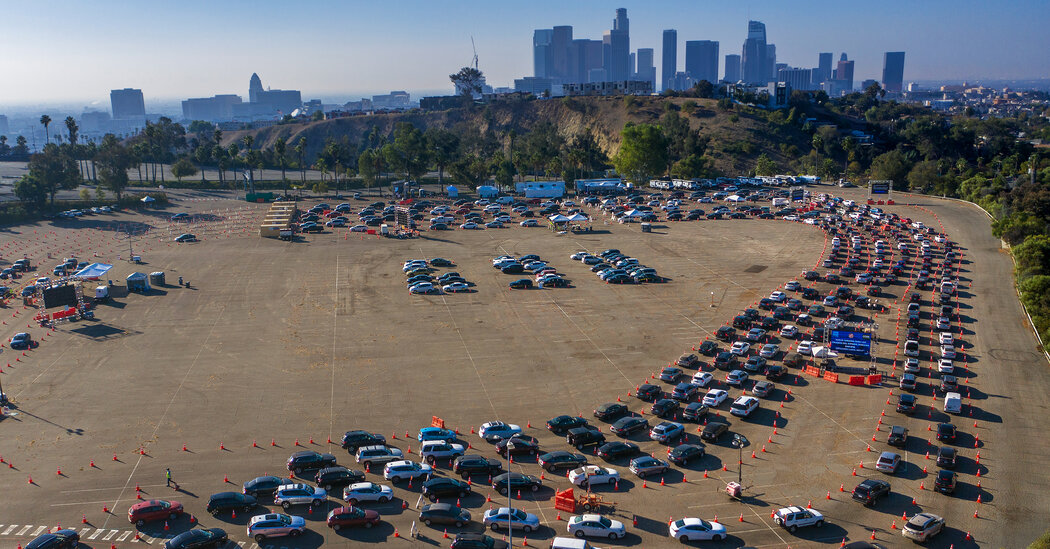 The coronavirus is spreading out of control in the United States, overwhelming health systems and killing more than 1,100 Americans a day. But there is a slender silver lining: It is hastening the testing of vaccines that could eventually end the pandemic.

The surging virus has already allowed Pfizer and Moderna to accelerate the testing of their vaccines, which appear to be very effective at preventing Covid-19.

And if, as seems inevitable, the virus continues to proliferate — it is spreading faster than ever in the United States and some other countries — it is likely to speed the evaluations of promising vaccine candidates from other pharmaceutical companies.

“We are seeing something apocalyptic play out in terms of the level of transmission in the country right now,” said Dr. Peter Hotez, a vaccine scientist at the National School of Tropical Medicine at Baylor College of Medicine. “Unfortunately, this pandemic is still raging, and that affords lots of opportunities to look at vaccine efficacy.”

Over the last week, an average of more than 158,000 new coronavirus cases have been confirmed each day in the United States. More than 159,000 were reported on Tuesday.

The trials are designed so that once a certain number of participants contract Covid-19, an independent panel of experts will conduct a preliminary examination of the data. (Other factors, such as how much time has passed since participants have been vaccinated, can factor into that timing, too.) The trial ends after a certain number of cases — around 150 to 170 — have accrued. That number is chosen to make sure the results have sufficient statistical power to tell how well the vaccine works.

Pfizer announced on Wednesday that its vaccine was 95 percent effective and had no serious side effects. The company, along with its German partner BioNTech, reached those findings after 170 participants in its trials — the vast majority having received a placebo — contracted Covid-19.

The news came barely a week after a preliminary analysis found Pfizer’s vaccine to be more than 90 percent effective. That data was analyzed after 94 participants caught Covid-19, nearly three times the number that the company had originally planned would set off an early look to gauge the vaccine’s efficacy.

The same phenomenon aided Moderna, which announced on Monday that an early analysis had found its vaccine to be 94.5 percent effective. The company had planned on needing only 53 cases of Covid-19 to turn up in its trial before experts would take a first look at the data. But the nationwide surge in infections helped Moderna blow past that number: The results were based on 95 sick participants.

The relatively large numbers of sick people in the trials — coupled with the vaccines’ apparent effectiveness — could help bolster public trust.

“It’s going to be hard enough to convince people to take this vaccine as it is,” said Geoffrey Porges, an analyst for the investment bank SVB Leerink. “So the more confidence you can have, by virtue of having higher statistical power, by virtue of having more events — then that should go somewhere.”

In the coming weeks and months, the worsening pandemic could make results from other closely watched trials, such as one for a vaccine developed by Johnson & Johnson and another by AstraZeneca and the University of Oxford, available sooner and with greater statistical power.

The fast-growing pandemic could also speed up trials of treatments for Covid-19.

The drug company Regeneron, for example, is testing the antibody treatment that President Trump received after he caught Covid-19. A company spokeswoman said enrollment in its trial — participants are Covid-19 patients who have not been hospitalized — had accelerated slightly this month.

Even if the grim situation in the United States ultimately helps vaccines and treatments become available sooner, the country would have been much better off if it had kept the pandemic under control, public health experts said.

“This is not how anyone would want it to play out,” said Natalie Dean, a biostatistician and an expert in vaccine trial design at the University of Florida. “I’d rather be South Korea,” which has kept the virus at bay since early in the year, she said.

Vaccines are unlikely to be widely available for months. By then, tens of thousands of additional Americans will probably have perished.

Pfizer and Moderna, whose vaccines appear effective, have been waiting to see if side effects pop up in participants before the companies submit their data to the Food and Drug Administration for authorization to distribute the vaccines. Once the F.D.A. gives them the green light, manufacturers will have to ramp up production and work with governments to distribute the vaccines. Shots will initially be available only for health care workers and other vulnerable groups. When vaccines do become widely available, it is not clear if their protection will last for months, years or decades.

Hoping to fast-track their testing, drug makers have been setting up trials in Covid-19 hot spots all over the world — not just in the United States.

In China, where the virus was rampant early this year, new cases have slowed to a trickle. As a result, Chinese vaccine makers are running late-stage trials of their candidates in countries like the United Arab Emirates, Morocco, Argentina and Peru.

Novavax, based in Maryland, which is developing one of the 12 vaccines that are in the final phase of clinical testing, has enrolled more than 9,000 participants in Britain since beginning a Phase 3 trial there in September. Novavax’s president for research and development, Dr. Gregory Glenn, told analysts last week that he was “feeling very good about our ability to collect cases.”

Britain reported more than 20,000 new cases on Tuesday, part of a surge that picked up around the start of October.

Vaccine developers select different parts of the world to conduct their trials for several reasons. They need to ensure that the vaccine has been tested on populations that reflect the world’s diversity. They also must make sure they can enroll participants in regions where the virus is spreading.

“What is a hot spot initially will not necessarily stay a hot spot,” said Dr. Dean of the University of Florida, who has studied how to make clinical trials flexible enough to work during epidemics.

That’s why developers testing Covid-19 vaccines have been carefully watching where the virus is surging to make decisions about where to set up sites to enroll participants.

Johnson & Johnson is testing one version of its vaccine in the United States and other countries. The trials — which are set up or planned at more than 200 locations globally, including in 30 states — were chosen in part by modeling the case numbers in different regions, said Jake Sargent, a company spokesman.

Johnson & Johnson announced on Monday that it had started another trial of its vaccine, testing two doses instead of one. The company aims to enroll 30,000 participants in Belgium, Colombia, France, Germany, the Philippines, South Africa, Spain, Britain and the United States. Johnson & Johnson said the locations were chosen “in countries and areas with high incidence of Covid-19.”