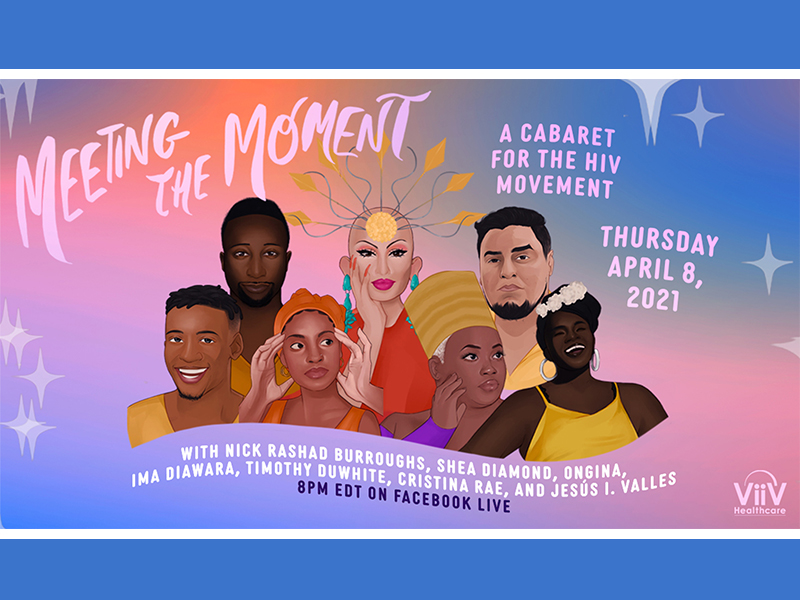 GlaxoSmithKline’s ViiV Healthcare is hosting its second virtual cabaret event in five months, and while that may seem like a bit of sparkly fun, it’s really about inspiring and engaging the community—especially now.

ViiV’s “Meeting the Moment” cabaret is again hosted by “RuPaul’s Drag Race” alum drag queen Ongina, and it features a mix of talent from the HIV community—singers, poets, and spoken word and visual artists. The show is streaming live on Facebook Thursday and will be available to view online after the event.

“We had a tremendous response with the first cabaret, and I think what we’re seeing is kind of a ripple effect,” Marc Meachem, ViiV’s head of external affairs for North America, said. “I really believe that if you give people some positivity, they suck it up, and they transmit it.”

He called these events “fuel in the tank” for the community. The proof? Comments during the live feeds plus letters and texts ViiV received afterward from people telling the company how important this representation is to them.

ViiV is no stranger to getting creative to engage with its audience, between the cabarets; ViiV’s “Being Seen” podcast, which was picked up for a second series; and previous Broadway plays. The goal is representation and seeing people with HIV as whole, well-rounded individuals with rich lives and not just a diagnosis.

Of course, the reality is not all fun and cabarets. HIV is still an epidemic, and concerns rose during the COVID-19 pandemic about the new virus’s effect on HIV testing and care. There’s still a question mark about whether the world will see a potential rise in infections when people start returning to medical appointments.

Worldwide, the original goal was ending the HIV epidemic by 2030, and Meachem still believes that’s possible. However, he referenced Greg Millett, vice president and director of public policy at amfAR, the Foundation for AIDS Research, who said that while the path for “ending” the epidemic is still possible for white men who have sex with men, current trends indicate that it won’t be the same for Black and Latino men.

The way ViiV sees it, as far as achieving the goal of ending HIV, keeping the HIV community engaged—through the shows, podcasts and other outreach—is key.

“When you take on a project like ending the epidemic, which is about societal change, the systems have to change, society has to change, stigma has to change. You can’t just do it with medicines alone,” Meachem said.