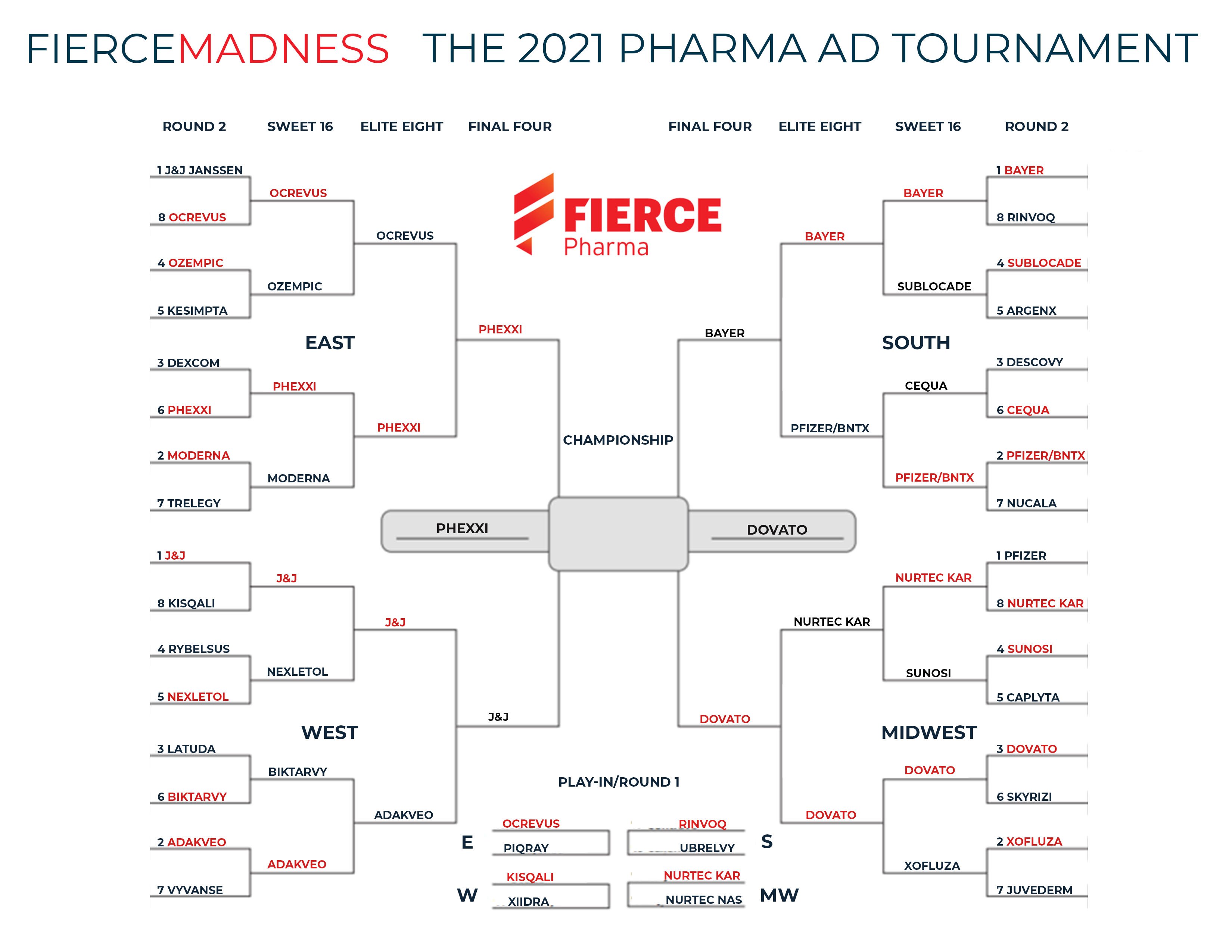 The final showdown is set in the FierceMadness DTC ad contest.

Dovato from GlaxoSmithKline’s ViiV Healthcare will go up against Phexxi from Evofem Biosciences for the championship title.

Phexxi, the small pharma brand that could, moved on in the ad tournament with a close win over Johnson & Johnson’s “The Road to a Vaccine” campaign. While COVID-19 vaccine campaigns sailed through several previous rounds, it wasn’t enough to beat the devoted Phexxi voters.

The vaccine series was well received; as one commenter said, “This series was fascinating and timely! It was a welcome break from baseless opinions to hear from accredited experts during a time of great uncertainty.”

Another pointed out the uniqueness of the J&J work. “Simply groundbreaking. Anyone can make a video or commercial, but to go live … for an entire year and take viewer questions and provide real, science-based information and conversation with the audience in the middle of a pandemic takes guts that no other brand has done before.”

Still, it was Evofem and Phexxi that garnered more votes for its “new and exciting” work.

“Phexxi’s overall campaign, from the commercial to what they’re doing on social media, is a really fresh and relevant approach to birth control content, which tends to be outdated, dry, or boring,” one wrote.

And the Phexxi devotees are already looking for another big win. One confident voter even wrote, unironically (we think), “At this point, you should probably just crown them the winner. I mean, it’s sex. Everyone loves sex. So much cooler than vaccines.”

In the other Final Four matchup, GSK ViiV’s Dovato topped Bayer’s corporate “Why We Science” umbrella effort for its portfolio of products, which launched before the pandemic began.

Bayer admirers did like its “hopeful” and “forward-looking” campaign. But Dovato scored more points for its use of real patients and “empowering” stories designed to dispel the stigma of HIV and reveal the people beyond the diagnosis.

As one voter wrote, “This is what pharma advertising should strive to do—connect with people … Who knows more about life with a condition than the people with the condition?”

Voting starts here for the ultimate winner! This is a long round that runs through Sunday, so rally co-workers and friends to help crown your favorite brand as the winner.

One vote per person, please. Championship fever strikes even the most fair-minded people, but multiple votes from the same internet IP address will be disqualified.

Good luck to the finalists! Cast ballots here now through Sunday at 6 p.m. and check back Monday to find out which campaign is the big winner.