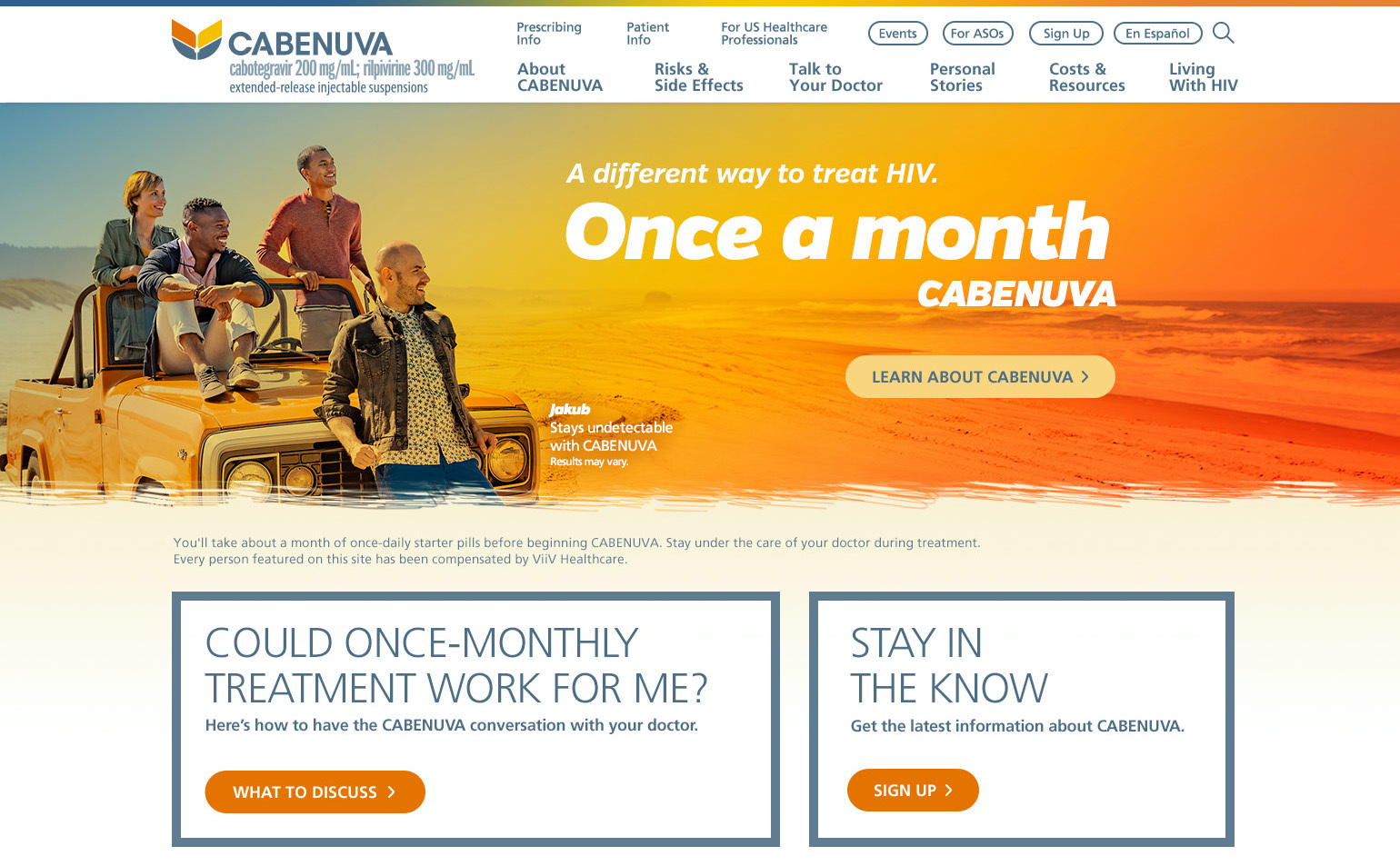 GlaxoSmithKline’s ViiV Healthcare is taking it slow in the rollout for new HIV med Cabenuva. That’s because the first approval of a once-monthly dosing regimen marks a big change for doctors and patients.

To manage the expectations of both, ViiV has been focusing since Cabenuva’s January approval on educating physicians and their office staffs. Now, it’s starting to launch digital DTC marketing to patients—but only in areas where they believe doctors’ offices are well prepared to administer the drug.

The balance? Making sure not to drive too much consumer demand before physicians’ offices are prepared.

“We knew that when we’re going to launch the first and only long-acting injectable in HIV that it was going to be a significant change for HCPs,” said Robin Gaitens, ViiV Healthcare’s product and community communications director. “So since approval we’ve been focusing our efforts on educating HCPs and office staffs on the product and how to implement it in their offices.”

The good news is Cabenuva already has “exceptional” brand awareness among physicians, thanks not only to sales rep efforts but also driven by strong clinical study results presented at medical conferences over the past two years, she said.

The digital banner ads rolling out in selected early markets drive people to the Cabenuva website where ViiV lets patients do the talking.

Three men and one woman explain why they each appreciate the once-monthly HIV treatment. Convenience, flexibility and discretion are some of the benefits they point to.

Steve talks about when he was first diagnosed—dealing with internal stigma, hiding his pills from family and friends, worrying about questions when he would travel for work.

“Until I got on Cabenuva and the long-acting injections, I didn’t really fully appreciate the toll that it was having, that daily reminder and the fear around my pills being discovered,” he said.

Another patient, Karen, talks about the convenience of the monthly injectable: “I have two jobs. Normally when you take the two pills you have to take them at the same time, and that would be hard with my lifestyle.”

All four men and women featured in the online videos participated in Cabenuva clinical trials.

ViiV plans to launch a national DTC campaign, but not until doctors’ offices are ready; there is no formal timeline, but it likely won’t happen until later this year or even next.

In the meantime, ViiV applied in February for another FDA approval for Cabenuva to stretch dosing to two months. ViiV submitted its application to allow injections every two months in adults who are virologically suppressed on a stable drug regimen.

Along with Cabenuva, GSK counts two-drug regimens Dovato and Juluca in ViiV’s portfolio as the British drugmaker looks to nab share from market leader Gilead Sciences. Its triple-combination drug Biktarvy is the best-selling HIV med with sales of $7.26 billion last year.

ViiV is also advancing the cabotegravir component in Cabenuva as a challenger to Gilead’s monopoly in HIV prevention, also known as PrEP. The ViiV drug, given every two months, showed efficacy superior to Gilead’s daily Truvada in both men and women in late-stage trials.

But the Truvada brand won’t be its only competition: The drug is now available as a generic, and Gilead’s newer Descovy is carrying the PrEP banner forward on the branded side.