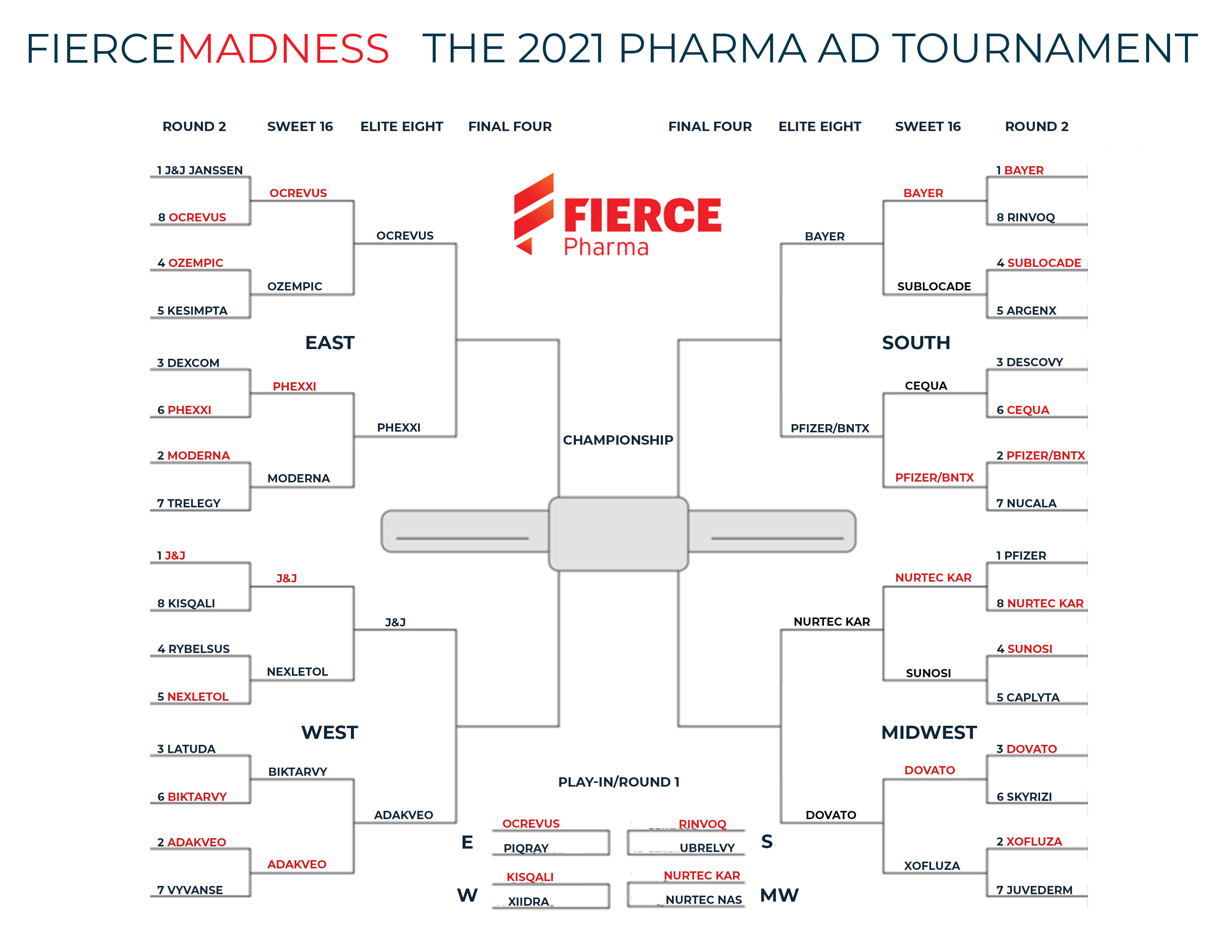 FierceMadess voters have spoken—and now, just an Elite Eight pharma advertisers are still in the running for the 2021 title.

Before we kick off the next round of voting to get to the Final Four matchups, let’s take a look back at the Sweet 16 round and the victories over the past several days.

In the East division, Roche’s Ocrevus campaign continues its march after beginning the tournament as a play-in contender. “Dear MS” won praise for its “real people = really powerful” portrayals as well as a timeliness that “communicates the devastation of the disease, pandemic responsibility (masks), and hope in the MS community.”

Evofem’s first campaign ever, for contraceptive gel Phexxi, topped Moderna’s Uber collaboration. Although at least one person picked Moderna in thanks for its COVID-19 vaccine, Phexxi’s hip, tongue-in-cheek effort won out. Commenters liked its empowering, fresh creative and pointed out it’s “aiming to solve a great need.”

In the West matchups, both J&J’s “The Road to a Vaccine” series on its vaccine development and Novartis’ Adakveo “Do U Dance” TikTok challenge with Ellen TV show DJ Twitch easily triumphed.

J&J won with a lot of support for COVID-19 vaccines coming through. Comments such as “The more people that get vaccinated, the quicker we can overcome and end this pandemic” and “Top of mind for consumers wanting to return to normal.” As another voter summed it up: “Road to Vaccine is a road to life again.”

Novartis got kudos for the dance creativity in its campaign, with one commenter writing “Norvartis killed it with this concept. Love this a lot.”

In the Midwest division, Biohaven celebrity spokesperson and migraine sufferer Khloe Kardashian crushed the competition and will now face ViiV Healthcare’s Dovato “Everything That I Am” campaign, which also finished with a strong vote tally.

Meanwhile, the South division is shaping up to be an interesting Elite Eight matchup with Bayer’s corporate “Why We Science” going up against Pfizer and BioNTech’s “Remember Normal.” Will the COVID-19 vaccine sentiment overpower Bauer’s “very pro science” message that “speaks to value of the industry”? Check back Monday to find out.

With that said, voting is now open for the next round of winners. Pick now for your favorites to push through to the FierceMadness Final Four.

This round will last through Sunday at 6 p.m., but don’t wait. Spread the word to co-workers and friends and make sure the best ads advance. Please be a good sport—only one vote per round per person.

Good luck to the Elite Eight—cast your ballots here.

Ad: “The Road to a Vaccine”
Company: Johnson & Johnson
Just weeks into the pandemic last year, J&J debuted an ambitious weekly live series “Road to a Vaccine” with journalist host Lisa Ling. The almost yearlong show featured its own scientist and outside public health officials on a variety of COVID-19 topics.

Ad: Adakveo “Do U Dance”
Company: Novartis
Twitch, the celebrity dance and “Ellen” show DJ, challenged social media users to a do their own dance in Novartis’ Adakveo campaign, raising awareness of sickle cell disease.

Ad: “Remember Normal”
Company: Pfizer and BioNTech
Pfizer and BioNTech tap sentimental longing for pre-pandemic days with a campaign that looks forward to the promise of a more normal life with a COVID-19 vaccine.