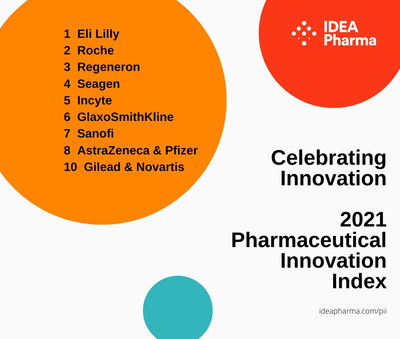 If you gave a pharma a molecule, which one would make the most of it? Eli Lilly, according to IDEA Pharma’s most recent evaluation.

It ranks innovation as a measure of a pharma company’s ability to deliver a “return on invention” over the past five years.

Lilly moved up four spots in 2020, backed by clinical data wins and FDA approvals, as well as strong performance by recently launched drugs, the consultancy reported.

Lilly was followed by Roche which was No. 1 last year, but then a group of smaller pharma players— Regeneron, Seagen and Inycte—rounded out the top five. Both Seagen and Incyte are new to the consultant’s top 30 list, while Regeneron jumped up from No. 10.

Why so many smaller brands? Because the study not only takes into account sales as a measure of success but also the clinical data and launch success of novel molecules and biologics. The smaller company inclusions in both the 2021  innovation and invention rankings could mark a shift in the industry.

RELATED: Which pharma companies are the most innovative? Roche, AstraZeneca top the list

“Smaller companies are, more than ever, able to bring their products to patients without a traditional large pharma partner,” the study points out.

On the Invention list, for example, Bristol Myers Squibb took the top spot, showing “the value of the Celgene acquisition for its pipeline.”

As a precursor to the innovation ranking, the invention ratings look at the breadth and depth of novel agents in a company’s portfolio and the potential for a leap to innovation among pharma companies’ research and development.

Following BMS at No. 2 on the invention list was Incyte, while Pfizer, Lilly and BeiGene rounded out the top five. Incyte and BeiGene were both first-timers on the overall top 30 list.

Lilly’s achievement in reaching the top spot again in 2021—it was No. 1 in 2019 then dropped to No. 5 in 2020—comes with its Emgality approval for migraines and “key differentiated data” in the space, the report noted.

It also pointed to novel drug approvals for cancer drug Retevmo and Tauvid as an Alzheimer’s diagnostic agent as factors in Lilly’s rise. Other points were its increased R&D investment of 9% over the previous year and a strong pipeline, specifically diabetes treatment trizepatide and plaque psoriasis med mirikizumab.