New Delhi: The death rate from the Covid pandemic has risen sharply across the country in May, with Delhi registering the highest case fatality rate (CFR) among bigger states during the first three weeks of this month (till May 21).

The capital recorded 6,684 deaths as against a little over 2.63 lakh cases reported during this period, translating to a CFR of 2.54%. This is more than twice the fatality rate of 1.12% recorded in Delhi in the previous three weeks and significantly higher than the capital’s overall CFR of 1.63%.

The national CFR in May so far is 1.17%, also a sharp rise from 0.73% recorded in the previous three week (April 10-30). This is because deaths have risen at a sharper rate than cases in May so far.
The country has reported 83,135 deaths in May, a 92% rise from the 43,258 fatalities in the previous three weeks. By contrast, cases have risen by around 20%, up from 59.5 lakh in April 10-20 to 71.3 lakh in May 1-21. Cases have been falling since peaking around May 8 but the death count has shown a much lower decline, possibly owing to a lag of around two weeks normally seen between trends in deaths in comparison to cases. The overall CFR in the country is 1.13%.

Among the bigger states, Punjab has the second highest death rate in May of 2.46%. Uttarakhand, the venue of this year’s Kumbh, has the third highest CFR of 2.34%, higher than the rate in the previous three weeks (1.18%) as well as the state’s overall rate of 1.85%, pointing to a big surge in deaths in recent weeks. 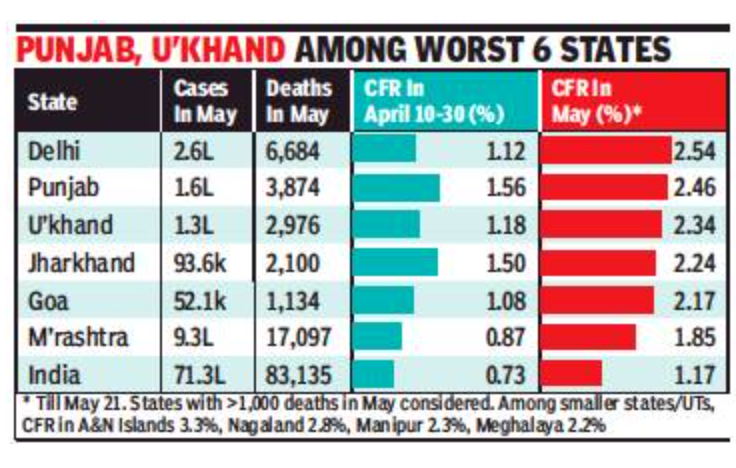