Mumbai: While the search for the highly contagious UK mutation of Covid-19 continues in India, researchers from Tata Memorial Centre in Kharghar have found three patients from the Mumbai Metropolitan Region (outside Mumbai) with an equally worrying mutation. Called the E484K mutation, it is linked to the South African strain.

“This is one of three mutations (K417N, E484K and N501Y) seen in the South African lineage,” said Dr Nikhil Patkar, associate professor in haematopathology at Tata Memorial Centre’s Kharghar unit called ACTREC, whose team found the E484K mutation in three out of the 700 Covid-19 samples it put through gene sequencing. The E484 mutations are worrying as they can ‘fool’ or escape three antibodies that the body’s immune system makes.

News outlets around the world have begun terming the South African variant as “more of a problem” than the UK variant, which has caused a second wave across Europe.

As vaccines work on the principle of creating antibodies, researchers across the world are now weighing the E484’s effect on mass Covid-19 vaccination programmes under way in various countries. “The E484K mutation is less susceptible to neutralisation by antibodies formed against the virus,” said Dr Patkar. “It is still uncertain what this means for vaccination and resulting immune responses,” he said.

The Tata Memorial Centre usually carries out genetic sequencing for cancer patients, but was roped in for SARS-CoV-2 testing and sequencing during the Covid pandemic.

In April, the ACTREC team would find four to five mutations in the samples, but they increased to 10-12 by September.

“Interestingly, SARS-CoV-2 isolates from three male patients (aged 30, 32 and 43 years) with Covid-19 were found to harbour the E484K mutation and were diagnosed to have Covid-19 in September,” said Dr Patkar.

These patients experienced a relatively milder form of Covid-19, with two requiring home quarantine, while one needed hospitalization but didn’t need oxygen support or ventilation.

Incidentally, in a review study that is slated to be published soon, the Delhi-based Institute of Genomics and Integrative Biology found that 19 out of the 86 genetic variants were found in genomes from India.

However, the jury is still out there as far as the B1117 and E484 mutations are concerned. “If we were to have newer strains infecting people, then it would have spread like wildfire by now. These variants have been in circulation since September, and haven’t resulted in larger outbreaks here,” said Bengaluru-based epidemiologist Dr Giridhar Babu from PHFI (Public Health Foundation of India). 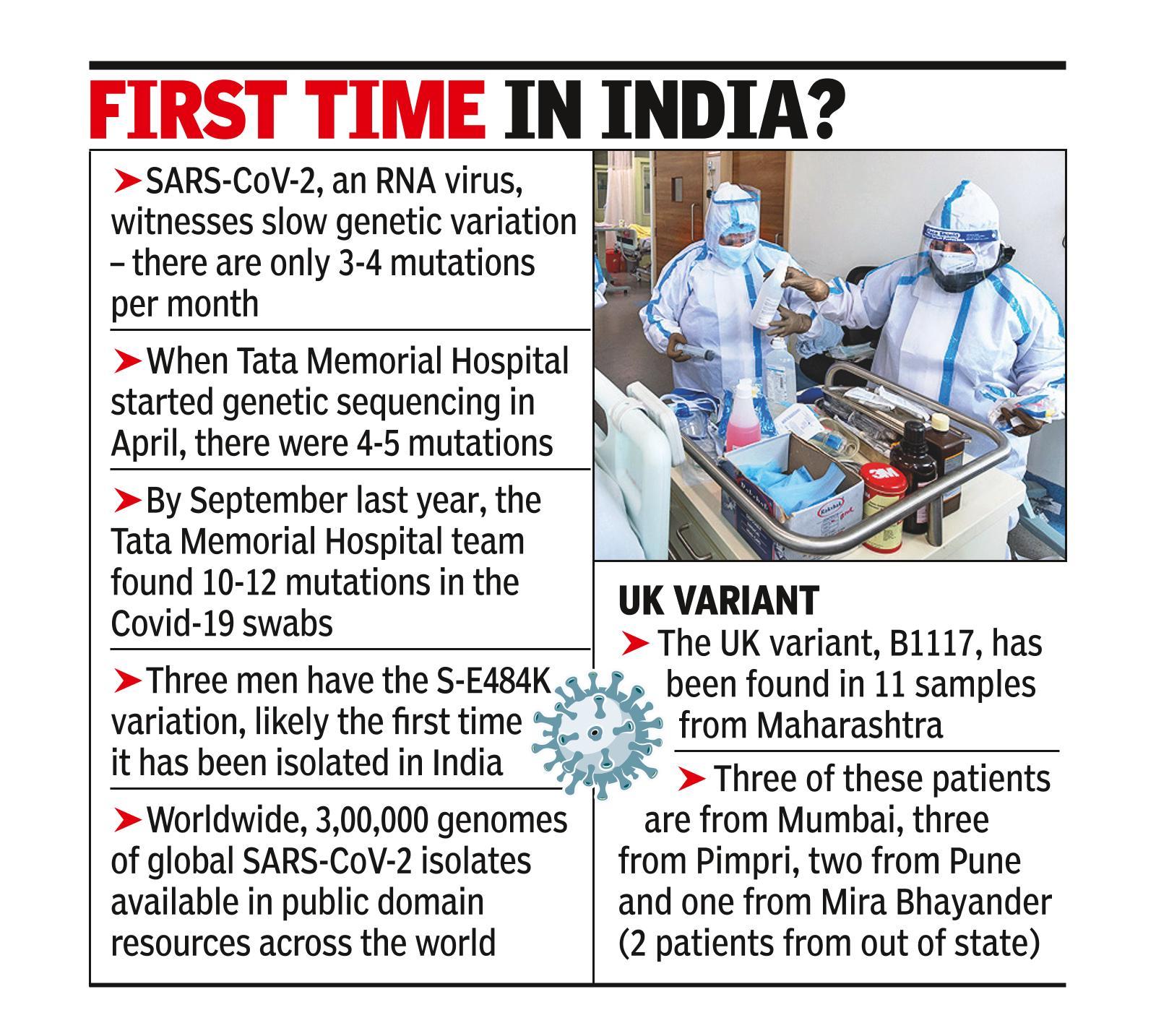