Bristol Myers, bluebird bio have their BCMA CAR-T nod, but latecomer J&J could have an advantage: analysts 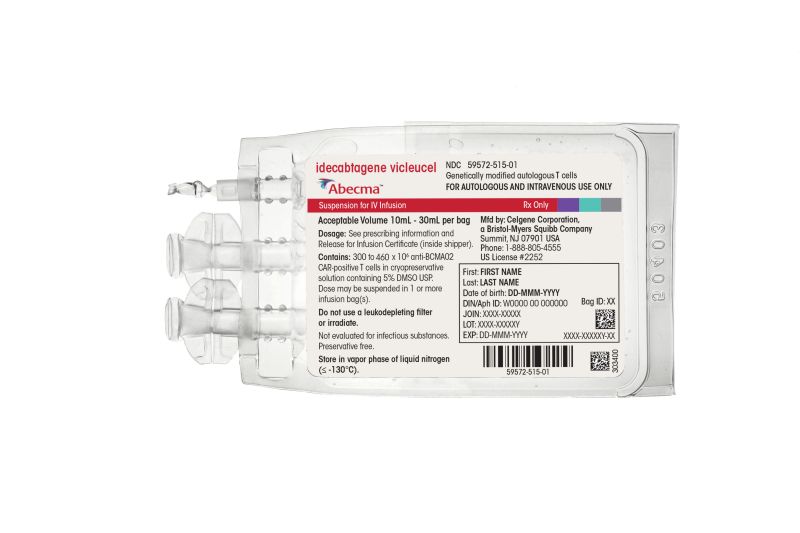 Bluebird bio and partner Bristol Myers Squibb have outrun Johnson & Johnson and Legend Biotech in snagging the first FDA nod for a BCMA-targeted CAR-T therapy. But the label of the new drug, dubbed Abecma, could hand its upcoming competitor an advantage, analysts say.

The FDA greenlighted Abecma, also known as ide-cel, for multiple myeloma patients who have received at least four prior lines of therapy. Bristol and bluebird will jointly commercialize the drug at a list price of $419,500, and by SVB Leerink analyst Mani Foroohar’s estimate, the net price could be $375,000.

Bristol Myers and bluebird are in a co-promotion and profit-share agreement for the drug in the U.S. Foroohar expects peak Abecma revenues for bluebird at $629 million, he said in a Monday note to investors.

But the indication isn’t as ideal as some had anticipated. A multiple myeloma expert at “a leading academic center” interviewed by RBC Capital Markets earlier this month was expecting a broader label that would allow patients to take the CAR-T therapy after failing just two lines of therapy.

The pivotal phase 2 KarMMa trial, on which the FDA based its nod, tested Abecma in patients who had received at least three prior lines of therapy. Among 100 evaluable patients, 88% had received four or more prior treatments. Within this 100-person population, Abecma triggered responses in 72% of patients, including 28% that went into complete remission.

But with the current fifth-line label, the agency’s asking patients to try and fail at least four existing treatments. These may include Johnson & Johnson’s CD38 antibody Darzalex, proteasome inhibitors such as Takeda’s Velcade, and immune modulators like Bristol Myers’ own Revlimid.

The fact that Abecma’s being pushed back to very late in treatment might give J&J an advantage for its Legend-partnered rival BCMA CAR-T therapy cilta-cel if it manages a label for earlier use. J&J filed cilta-cel with the FDA on a rolling basis toward the end of 2020. As patients move into later lines of treatment, they’re less likely to respond to therapy—and when they do, responses generally don’t last as long.

Cilta-cel shows what the RBC team characterized as “directionally” higher responses than those Abecma produced. In the phase 1b/2 CARTITUDE-1 trial, the J&J CAR-T showed an overall response rate of 97%, with 67% showing no signs of tumor. But it also came with more safety problems, so the expert RBC interviewed said she envisioned using it in fitter patients initially.

Physicians that Cantor Fitzgerald analyst Louise Chen talked to prior to Abecma’s approval also did “not have a clear winner in mind” between the two BCMA-directed CAR-T therapies.

But Chen noted that cilta-cel’s relatively later onset of cytokine release syndrome (CRS)—a potentially life-threatening immune overreaction that shows up in CAR-T recipients—could give the J&J drug a competitive edge. While CRS usually appears in seven days with cilta-cel, Abecma, in contrast, has a median one day to onset. “We view this as positive for JNJ since patients can be treated in the outpatient setting with cilta-cel,” Chen wrote in a Sunday note.

All existing CAR-T therapies are linked to the risk of CRS. For Abecma, that risk is included in a boxed warning, and patients are required to be monitored at least daily at a certified healthcare facility for such symptoms for seven days after infusion. Although the label doesn’t explicitly require in-patient admission, Jefferies analyst Biren Amin said he expects most patients will be hospitalized for seven days given the drug’s CRS onset time.

Information on other serious side effects, including increased neurologic toxicities and prolonged cytopenia—a reduction in mature red blood cells—is also included in the boxed warning, which Amin viewed as a potential leg up for cilte-cel.

Abecma and cilta-cel aren’t the only BCMA-targeted drugs out there. Before Abecma, GlaxoSmithKline won an FDA go-ahead for antibody-drug conjugate Blenrep, also clearing it in myeloma patients after four other treatments. Pfizer, for its part, has launched a registration-enabling phase 2 trial of its BCMAxCD3 bispecific antibody drug elranatamab in relapsed and refractory multiple myeloma.