India recorded its biggest weekly spike in coronavirus infections till date, with the March 22-28 count showing an increase of more than 1.3 lakh cases over the previous seven days. In percentage terms, deaths registered the sharpest rise yet — 51% — with 1,875 fatalities in the week, the highest since December 21-27.

Last week (March 15-21) had seen a 67% surge with cases increasing by over 1 lakh as compared to the previous week. Together, the last weeks have seen the worst surge in cases since the beginning of the pandemic. The case count has tripled in the past three weeks as 1.17 lakh cases were recorded during March 1-7, less than a third of the current week’s tally of 3,93,056, as per TOI’s Covid database.
India’s total Covid-19 caseload crossed 12 million (1.2 crore) on Sunday. With pandemic numbers on the rise again, the last one million cases came in 35 days, nearly half the time taken for the previous one million (65 days).

Active cases of the virus also topped 5 lakh, with a record single-day rise of 35,703 on Sunday. This was the fastestever rise of 1 lakh active cases, with the count rising from 4 lakh to 5 lakh in just three days. Deaths have been on the rise as well. The current week’s death toll of 1,875 was not just the highest this year but also a 51% increase over the previous week’s fatalities — the sharpest increase yet in the weekly fatality count.

Meanwhile, Karnataka became the fourth state in March to post over 3,000 fresh cases in a day. 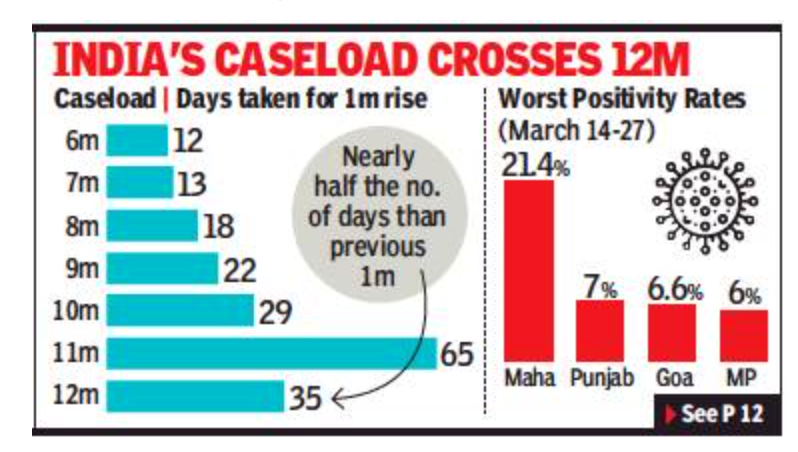