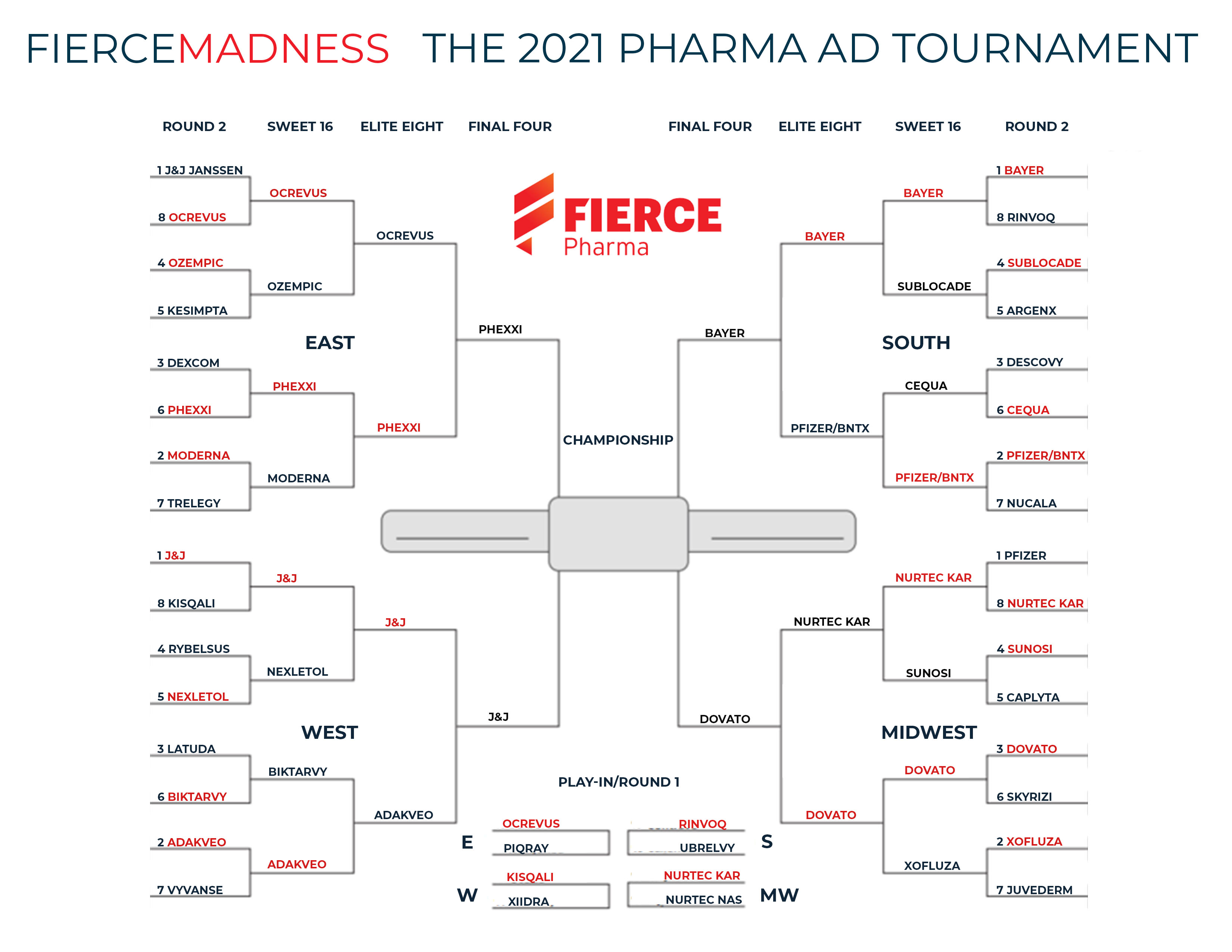 The Final Four in FierceMadness are set.

After a long weekend of voting and some closely contested Elite Eight matchups, Bayer, Johnson & Johnson, GlaxoSmithKline’s ViiV Healthcare and Evofem Biosciences remain in the running for the 2021 title.

The hotly contested Elite Eight matchups shut out one of the two remaining COVID-19 vaccine-related efforts. Pfizer and BioNTech’s hopeful “Remember Normal” campaign lost to Bayer’s corporate ode to science, while J&J’s “Road to a Vaccine” series won out over Novartis’ social work for Adakveo.

Some Pfizer commenters mentioned the vaccine connection with “love to the vaccine makers” shout-outs. As one voter wrote, “it’s the closeness and physical contact I miss most. These videos really ‘got’ to me.”

Bayer took the win, however, with its inspiring science-driven campaign. “Aspirational and hopeful. Precisely the kind of forward-looking message about science that we need at this time,” one commenter wrote.

Meanwhile, in the COVID-19 vaccine work still in the contest, J&J narrowly topped Novartis’ innovative social media campaign that included a TikTok dance challenge led by “The Ellen Degeneres Show” DJ Twitch. While commenters called the campaign “incredibly fun” and “current and refreshing,” vaccine positivity won out with multiple expressions of gratitude and the chance to “get back to a new normal life.”

As one person wrote, Adakveo is “a brilliant concept—but thanks J&J for the vaccine.”

In the East division, small pharma Evofem won a clean sweep with its first-ever product and DTC campaign for contraceptive Phexxi. Praise for the ad ranged from “framed the commercial … exactly how women think” to “fresh, edgy ad.”

In the Midwest final matchup, Biohaven’s Khloe Kardashian campaign was knocked out by ViiV’s Dovato campaign featuring real patients. While Nurtec and Kardashian did have fans who pointed out the value of a well-known patient ambassador, the celebrity push didn’t win over others who wrote “No to Khloe” and “No more Kardashians please.”

ViiV’s Dovato campaign garnered praise as “inclusive and inspiring” with “authentic humanity.” As one commenter wrote, it’s “a great campaign that emphasizes the lives and personalities of patients beyond their diagnosis. Hopeful.”

Voting is now open to pick the final two who’ll compete for the championship. Pick your favorites to go through to the final matchup. Please be a good sport—only one vote per round per person.

This round’s voting only runs through Tuesday at 6 p.m., so spread the word to co-workers and friends and make sure the best ads advance.

Cast your ballots here, and check back Wednesday to find out the last two campaigns that will go to the championship.

Ad: “The Road to a Vaccine”
Company: Johnson & Johnson
Just weeks into the pandemic last year, J&J debuted an ambitious weekly live series “Road to a Vaccine” with journalist host Lisa Ling. The almost yearlong show featured its own scientist and outside public health officials on a variety of COVID-19 topics.