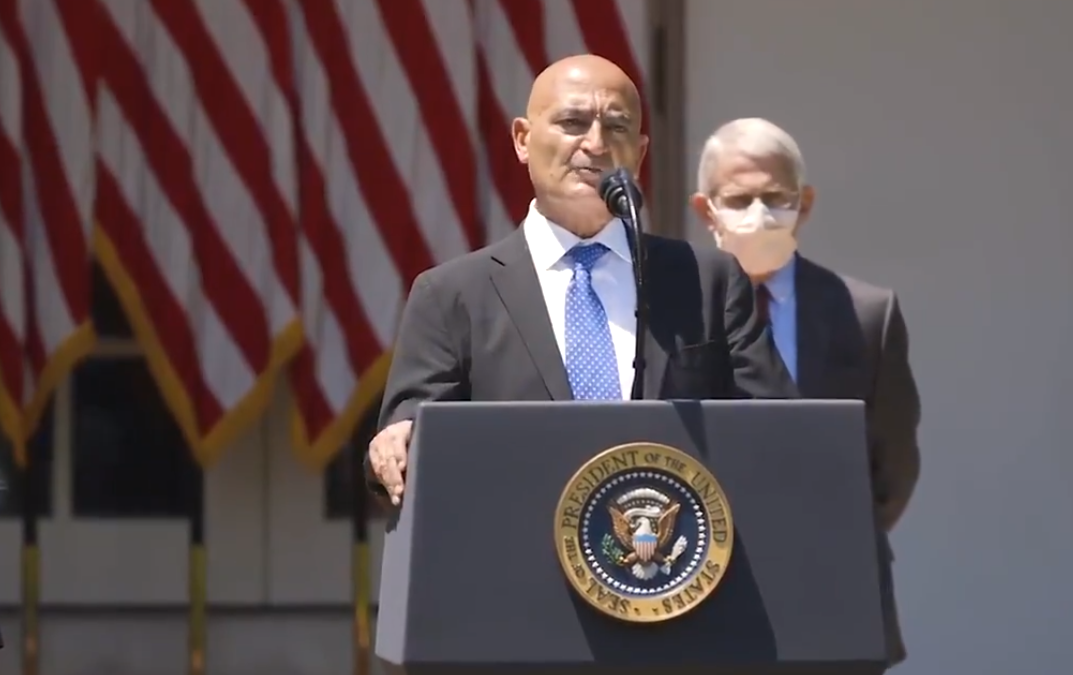 The U.S. government caught some heat earlier this week on news that it had signed an agreement to take just 100 million doses of Pfizer’s mRNA COVID-19 vaccine, which could win emergency use authorization (EUA) from the FDA as soon as tonight. Since that’s only enough doses for 50 million people, it won’t do much to help the U.S. reach its goal of vaccinating all Americans by summer—even if Moderna’s rival mRNA vaccine nabs an EUA next week, as expected.

Could COVID-19 shots from AstraZeneca and Johnson & Johnson get the U.S. to its goal? Yes, Moncef Slaoui, Ph.D., co-leader of the U.S. government’s Operation Warp Speed, said yesterday. Slaoui expressed confidence those vaccines would also succeed, in spite of serious questions that have been raised about AstraZeneca’s contender.

Data from the phase 3 trials of J&J’s and AstraZeneca’s shots, which are non-replicating viral vector vaccines, are expected by early February, Slaoui said at the Milken Institute’s 2020 Future of Health Summit. “These two technologies are actually easier to scale up in very high numbers of doses, in terms of capacity, than the messenger RNA technology,” that Pfizer and Moderna use, he said.

AZ and J&J are expected to provide 150 million to 200 million doses total of their vaccines in the first quarter of next year if they get the FDA’s nod, Slaoui said. With J&J’s vaccine potentially only requiring one dose—the others are two-dose regimens—that’s enough to vaccinate up to 150 million people. Add that to the 100 million people who will be covered by Pfizer’s and Moderna’s COVID-19 vaccines, and the U.S. should be well on its way to reaching its vaccination goal, Slaoui said.

Several additional vaccines are also in the pipeline, leaving Slaoui “confident we can cover the U.S. population within the first half of 2021,” he said.

RELATED: When will COVID-19 vaccines be widely available? Feds lay out an ambitious timeline

AstraZeneca’s road to market has been anything but bump-free, however. After interim data released last month showed that its COVID-19 vaccine was only a combined 70% effective in late-stage trials, the journal The Lancet published updated results on Tuesday that didn’t do much to raise hopes for the vaccine.

The Lancet data showed that the standard two-dose regimen of AstraZeneca’s vaccine was 62% effective in preventing COVID-19—a result that pales in comparison to the 90%-plus effectiveness of the mRNA vaccines. And AstraZeneca has yet to explain why there was a 90% efficacy rate among patients who had inadvertently received a half-dose in the trials.

The updated data from AstraZeneca also states that one case of transverse myelitis, a dangerous inflammatory reaction, could have been related to the vaccine. There have been no serious side effects reported in the Pfizer and Moderna trials, though regulators in Britain—where the Pfizer vaccine is already being administered—did warn that people with a history of severe allergic reactions should not get the shot.

AstraZeneca’s U.S. trial has recruited more than 17,000 subjects, Slaoui said. The company is hoping to offer healthcare providers a logistical benefit in that its shot can be transported at refrigerator temperatures, rather than the sub-zero temps required for mRNA vaccines.

Still, AstraZeneca’s less-than-stellar clinical trial results prompted analysts at Evaluate Vantage to declare that it “looks increasingly like an also-ran” and that ultimately it may not succeed in western markets.

RELATED: AstraZeneca hopes warmer storage needs for COVID-19 vaccine will be an advantage against mRNA competitors

J&J seems to be having considerably more luck with its vaccine candidate. The company said Wednesday it is scaling back its pivotal U.S. trial, enrolling just 40,000 volunteers, down from the original plan of 60,000. The reason? The high rate of COVID-19 infection in the U.S. should allow it to generate sufficient data with a smaller pool of participants, J&J said.

Slaoui said the J&J trial has already enrolled more than 35,000 volunteers, indicating it could wrap up soon. A readout from that trial could come in early January, he said.

All in all, Slaoui expressed optimism that Operation Warp Speed’s strategy would prove smart, despite the brouhaha over the government’s small order of Pfizer’s vaccine.

“We decided on Day 1 that we were not going to bet on only one vaccine. In fact, we selected four different platform technologies,” he said. The government is “very pleased” that the two mRNA vaccines “are on the verge of approval in the U.S., with one of them approved in the U.K.,” he added.