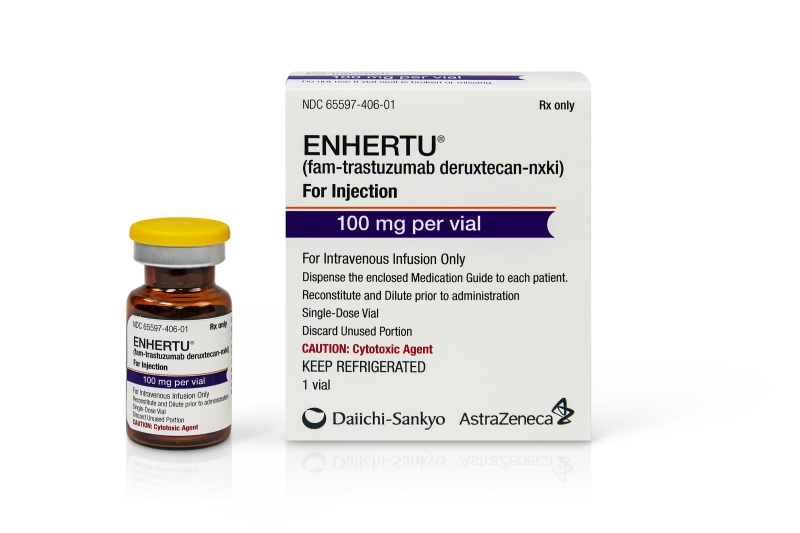 Daiichi Sankyo and partner AstraZeneca have taken their HER2-targeted cancer drug Enhertu another step toward blockbusterland.

An antibody-drug conjugate, Enhertu is the first HER2-directed therapy approved in gastric cancer in a decade, the companies said. And it earned the green light after showing—for the first time in this patient population—that an HER2 drug could top chemotherapy at helping patients live significantly longer.

In the pivotal Destiny-Gastric01 trial in Japan and South Korea, Enhertu cut the risk of death by 41% versus chemotherapy in patients who had progressed on at least two previous treatments, including Herceptin. At an interim analysis, patients on Enhertu had lived a median 12.5 months, versus 8.4 months with chemotherapy, according to data presented at the 2020 American Society of Clinical Oncology (ASCO) meeting. On the study’s primary endpoint of overall response rate, Enhertu shrank tumors in 40.5% of patients, compared with a response rate of 11.3% in the chemo arm.

Daiichi’s in the middle of a transformation that puts oncology front and center as the Japanese pharma pivots away from the cardiovascular and metabolic fields. As part of the overhaul, the company’s targeting JPY500 billion ($5 billion) in peak oncology drug sales. Enhertu could take about half of that load: It now bears a 2024 sales estimate of around $2.5 billion, with some bullish industry watchers projecting peak sales above $4 billion.

As of October 2020, Daiichi’s fiscal year 2020 forecast for Enhertu sales ending in March stood at JPY34.9 billion ($336 million). While third-line breast cancer and second-line stomach cancer with the HER2 marker are relatively small markets, AZ and Daiichi are eyeing a wide range of indications for potential expansion.

Also in stomach cancer, the two are running the Destiny-Gastric03 trial, testing Enhertu with or without AstraZeneca’s PD-L1 inhibitor Imfinzi in either previously treated or newly diagnosed HER2-positive patients. An exploratory portion of the current Destiny-Gastric01 trial also found some preliminary efficacy for Enhertu in patients with HER2-low disease, according to data presented at 2020 European Society of Medical Oncology virtual meeting.

In the phase 2 Destiny-CRC01 study, Enhertu triggered a response in 45.3% of heavily treated HER2-positive colorectal cancer patients who’d had a median of four prior therapies, according to preliminary data presented at last year’s ASCO.

In non-small cell lung cancer, the drug was linked to a 61.9% tumor shrinkage rate, in an interim analysis of the Destiny-Lung01 trial.

Because Enhertu showed activity in HER2-positive patients who had previously received Herceptin—its active component, trastuzumab, is the antibody component of Enhertu—industry watchers also expect the AZ-Daiichi drug to move into earlier lines of therapy, even in the post-surgery adjuvant setting. Roche’s own trastuzumab-based antibody-drug conjugate Kadcyla was approved in 2019 for adjuvant treatment of HER2-positive early breast cancer. Notably, the Roche drug previously failed in second-line, HER2-postive gastric cancer.