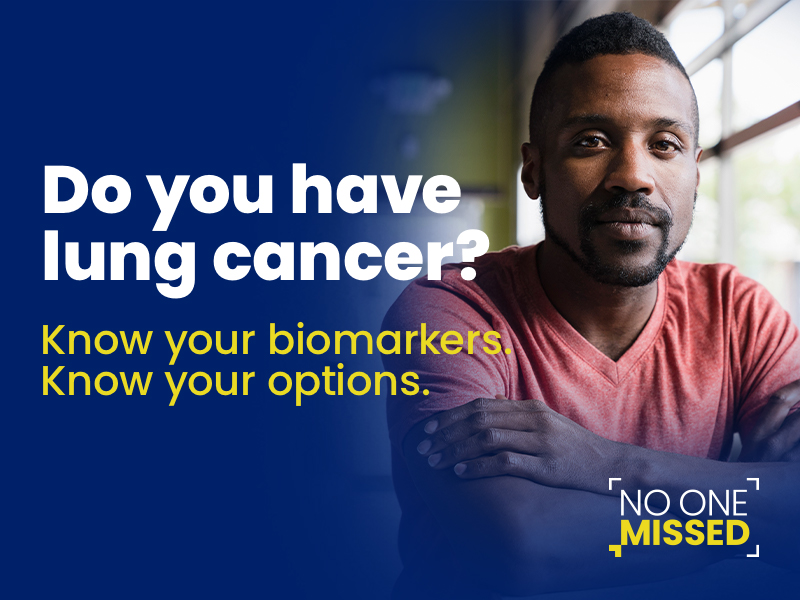 With targeted cancer drugs multiplying—and more on the way—AstraZeneca, Amgen and Roche’s Genentech are taking the lead to make sure all patients get the message about biomarker testing.

The campaign pushes “comprehensive biomarker” testing for a range of non-small cell lung cancer biomarkers. Think ALK, BRAF, EGFR, HER2, KRAS, MET exon 14 skipping, NTRK, RET, ROS1 and proteins such as PD-L1, the LUNGevity Foundation website notes. The pharma companies involved in the campaign have treatments approved or in trials collectively across all those biomarkers.

The pharmas are not only sponsoring the effort monetarily, but also are working as partners, Linda Wenger, chief marketing officer at the LUNGevity Foundation, said. For instance, they’ve reviewed and signed off on materials created for the campaign and on the website.

“What really excites me about ‘No One Missed’ is the collaboration of so many different stakeholders in the lung cancer community coming together behind one strong message,” she said.

Sitting at the center of the digital campaign is its website to jump-start patients, caregivers, supporters and advocates knowledge about lung cancer diagnostics.

“Everything comes back to the website, which has very high-level messaging—the basics on comprehensive biomarker testing what it is, why it’s important, how it’s done,” Wenger said.

While biomarker testing is the standard in academic institutions and big city cancer centers, rural and underserved areas may not have the latest information or the ability to do the testing. The campaign offers information about starting that conversation with a healthcare provider.

For AstraZeneca, it’s a doubling down on biomarker testing with now-concurrent awareness campaigns. In addition to the LUNGevity coalition, it also launched its own “It’s Okay to Ask” campaign with celebrity chef Ming Tsai.