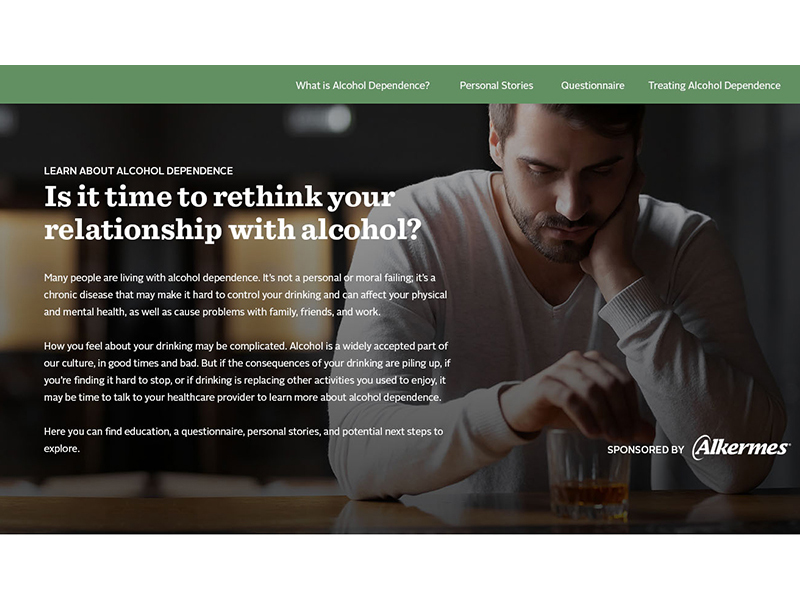 Alkermes started planning a alcohol dependency awareness campaign before the pandemic, but its launch now coincides with a much-publicized increase in alcohol use—and misuse.

The debut comes as study after study note marked increases in alcohol consumption during the pandemic. While not all drinking is problematic, spikes in binge drinking, especially among women, are causing concern. According to the National Institute of Alcohol Abuse and Alcoholism, 15 million people in the U.S. suffer from an alcohol misuse disorder.

Alkermes’ campaign emphasizes that alcohol dependence is a disease and not a moral failing. Shame often prevents people from seeking help and treatment.

“Thinking about it as more of a medical condition than just the bad behavior is really quite constructive,” said Jeff Harris, VP and general manager of addiction marketing at Alkermes. “It’s useful for people to have that framework and for people to see that there are medical criteria that you can assess and look at your own situation and make informed choices.”

The campaign’s initial effort focuses on a new website that asks prominently on the front page: “Is it time to rethink your relationship with alcohol?” The site is aimed at people either dealing with alcohol dependence or caring for someone who may be struggling.

A questionnaire developed by the National Institutes of Health walks people through a series of questions about drinking patterns. The site also includes personal testimonies and treatment options.

While the website is unbranded, there is an option in the treatment section to click though to a separate website and branded information on Alkermes’ addiction drug, Vivitrol.

In keeping with Alkermes’ focus on alcohol dependency as a disease state, the site lists diagnostic criteria for the disorder as outlined in the Diagnostic and Statistical Manual of Mental Disorders handbook.

Alkermes’ future plans include banner ads to drive traffic to the site, as well as sponsored content. A social media campaign with influencers who are active in the recovery community will launch over the next few weeks.

Alkermes has run into trouble in the past with its Vivitrol marketing. Complaints of overzealous lobbying and failing to properly highlight important risk information in its advertising earned it a reprimand from the FDA.