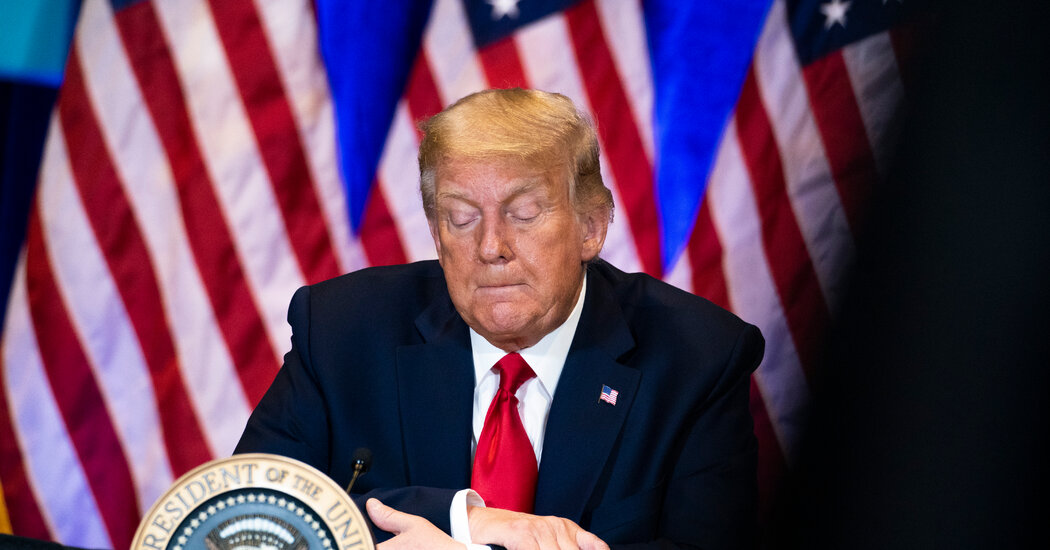 WASHINGTON — President Trump, like many men in their 70s, has mild heart disease. He takes a statin drug to treat high cholesterol and aspirin to prevent heart attacks. And at 244 pounds in a health summary released in June, he has crossed the line into obesity.

All of that, experts say, puts him at greater risk for a serious bout of Covid-19. So far, White House officials say Mr. Trump’s symptoms are mild — a low-grade fever, fatigue, nasal congestion and a cough — but it is far too soon to tell how the disease will progress.

“He is 74, he’s hefty and he’s male, and those three things together put him in a higher-risk group for a severe infection,” said Dr. William Schaffner, an infectious disease specialist at Vanderbilt University, adding: “Although he is being watched meticulously and may well do fine for a few days, he is not out of the woods, because people can crash after that period of time. This is a very sneaky virus.”

Mr. Trump will no doubt benefit from the best medical care the United States has to offer. On Friday evening, he was taken to Walter Reed National Military Medical Center in Bethesda, Md., the nation’s premier military hospital, where he was expected to undergo tests. The White House press secretary, Kayleigh McEnany, said Mr. Trump would remain there “for the next few days” out of “an abundance of caution and at the recommendation of his physician and medical experts.” She said he would work out of the hospital’s presidential suite.

Already, his doctors have taken extraordinary steps; on Friday they gave him a single infusion of an experimental antibody cocktail that is showing promising results in early clinical trials. He is also taking vitamin D, zinc, melatonin, famotidine (an antacid better known as Pepcid) and daily aspirin, according to a memo from Dr. Sean P. Conley, the president’s physician.

It is impossible to precisely calculate the risks to Mr. Trump; every patient is different, and doctors have learned that people can respond in different ways to the disease. Some remain asymptomatic. Some develop symptoms that linger for months. Some patients take terrible turns that plunge them toward death in days.

Still others can have serious health effects that take them out of work for extended periods of time. Dr. Anthony S. Fauci, the government’s top infectious disease expert, told lawmakers last month that scientists have been dismayed to find “a disturbing number of individuals who have inflammation of the heart,” among those who have recovered and appear asymptomatic.

“These are the kinds of things that tell us we must be humble, and that we do not completely understand the nature of this illness,” Dr. Fauci said.

As is the case with all Covid-19 patients, Mr. Trump’s overall health will make a difference in how he fares. Data from the Centers for Disease Control and Prevention shows that about 64.7 percent of Covid-19 patients with underlying health conditions in his age group have required hospitalization, and 31.7 percent have died.

“It’s really important to say there is no way to predict what any one individual patient will experience,” said Michael T. Osterholm, an epidemiologist who directs the Center for Infectious Disease Research and Policy at the University of Minnesota. “We can say generally, for example, older males have a twofold risk of life-threatening disease or dying over others, and obesity adds more.”

But, Dr. Osterholm said, many people in the same category of risk as Mr. Trump have completely recovered.

Mr. Trump’s persistent refusal to wear a mask may also change the course of his illness; if he became infected while his face was uncovered, he may have been exposed to a greater concentration of virus, which also raises his risk for severe disease, according to experts who have not examined him but were able to speak generally about patients like him.

“My big fear is that he probably had a greater exposure,” said one such expert, Dr. David A. Nace, a geriatrician and director of medical affairs at the University of Pittsburgh Medical Center’s network of 35 nursing facilities. “Right now he’s doing fine, but we’re early in this and we really have to watch him in the next two weeks.”

Mr. Trump’s true condition, though, may remain a mystery. The president has never been forthcoming about his health — apart from boasting that he is in excellent physical condition — and has never released complete medical records like presidents before him. In recent years, he has faced increasing questions on the subject.

In June, speculation swirled after videos emerged of him walking tentatively down a ramp at the U.S. Military Academy at West Point and having trouble bringing a glass of water to his mouth during a speech there.

In November 2019, Mr. Trump made an unannounced visit to Walter Reed for what White House officials later said was “regular, primary preventive care” — even though the president had undergone his annual physical examination just nine months earlier.

Early on Friday, White House officials indicated the president would convalesce at the White House. By day’s end, he was in the hospital.

Mr. Trump’s care is being supervised by Dr. Conley, a Navy doctor who is the official physician to the president, and a team of experts he is overseeing. (Dr. Fauci, in a brief text message conversation on Friday, said he had not been asked to consult on Mr. Trump’s care.)

In his memo on Friday after Mr. Trump received his experimental treatment, Dr. Conley said Mr. Trump had “completed the infusion without incident” and that he “remains fatigued but in good spirits.” He pointedly walked to the presidential helicopter for his flight to the Washington suburbs.

Mr. Trump also has the advantage of contracting Covid-19 at a time when doctors have learned how to manage the disease, as opposed to the early stages of the pandemic when many doctors were flying blind and death rates were far higher than now. Doctors now know, for example, that steroids can be useful in treating Covid-19.

And there are now two therapeutics that have emergency approval from the Food and Drug Administration for treating Covid-19: the drug remdesivir, which is given intravenously, and convalescent plasma, a therapy that uses blood from people who have recovered to induce an immune response. Both are generally used only on hospitalized patients.

A demarcation line in Mr. Trump’s treatment will be whether the president develops shortness of breath; if he does, his doctors may decide to keep him in the hospital and will almost certainly treat him more aggressively, said Dr. Amesh Adalja, an infectious disease expert and senior scholar at the Johns Hopkins Center for Health Security.

Dr. Adalja said some doctors are trying to use “monoclonal antibodies” — laboratory-produced molecules engineered to serve as substitute antibodies that can stimulate the immune system — to prevent hospitalization in patients with early-stage disease.

The antibody cocktail Mr. Trump received is made by Regeneron, a biotech company, which reported this week that its drug reduced the level of virus — known as viral load — as well as the time to alleviate symptoms in non-hospitalized patients with Covid-19. The company’s chief executive said Mr. Trump’s doctors asked for special permission to use the drug, and the Food and Drug Administration approved.