NEW DELHI: India has recorded a 6% decline in emission of hazardous sulphur dioxide (SO2) in 2019 compared to 2018 – the first decline in four years. But by contributing 21% of global anthropogenic emissions of sulphur dioxide, India continues to be at the top in the list of big emitters for the fifth year in a row.

The overall SO2 emissions fell for all the top three big emitters – India, Russia and China – for only the second time on record.

The declining trend continues, so far, even in 2020 thanks to a 10% drop in consumption of coal during the January-August period.

Releasing these findings on Thursday, the Centre for Research on Energy and Clean Air (CREA) and Greenpeace India attributed the decline in India’s SO2 emission to the country’s stride towards renewable energy and less consumption of coal.

Their report on ‘annual global sulphur dioxide emission’, however, expressed concerns over growing resistance among existing coal-based power plants in India to move to cleaner technology in a time-bound manner as initially planned by the government in 2015.

Since SO2 is a poisonous air pollutant that increases the risk of stroke, heart disease, lung cancer, and premature death, the environment ministry had in December 2015 introduced SO2 emission limits for coal-fired power stations and asked them to install flue-gas desulfurisation (FGD) to reduce emissions within two years. However, the December 2017 deadline for this was moved to 2022 after most of the units failed to install the technology within the timeframe. 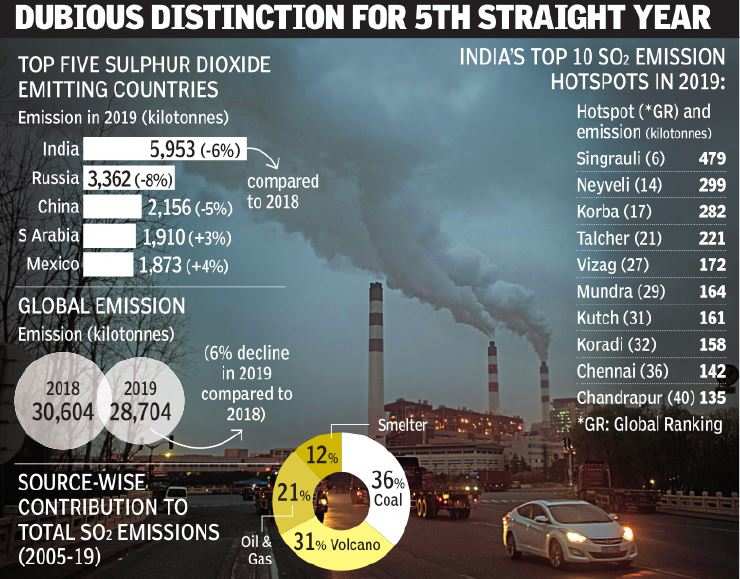 “Every single-day delay in implementation of prescribed norms and not installing the FGD system is causing huge health and economic damage to our society. It’s time the non-complying power plants are pulled up for inaction and damage to the society to ensure better implementation,” Sunil Dahiya, CREA’s analyst and one of the report’s authors, said.

The report shows that the overall SO2 emissions in India are high despite recording a decline of 6% in 2019 with majority of power stations still lacking FGD technology to reduce emissions.

As a result, the biggest emission hotspots are areas around coal-based power stations (or clusters of power stations) such as Singrauli, Neyveli, Mundra, Korba, Talcher, Korba, Kutch, Chennai, Chandrapur and Koradi. These areas are part of the top 50 global hotspots of SO2 emissions. The researchers used satellite data and a global catalogue of SO2 emission sources from Nasa to detect hotspots.